President Obama delivered a series of subdued attacks against Republican Presidential nominee Donald Trump, who he told to “stop whining” about the unsubstantiated claims that the election will be rigged in a press conference Tuesday.

“I’d advise Mr. Trump to stop whining and try to make his case to get votes,” President Obama said at a podium in the Rose Garden.

The president said “no serious person” would suggest that it is even possible to rig the presidential election process, which is controlled by state and local officials. Obama called Trump’s warnings about the election “unprecedented” and not rooted in facts. Trump has continued to warn his supporters that illegal immigrants and dead people will be casting ballots this election, despite statements by election officials that this is not true.

The president called Trump’s claims “irresponsible” and said they do not “show the kind of leadership and toughness that you want out of a president.”

“The person who loses the election congratulates the winner, reaffirms our democracy, and we move forward,” he said. “That’s how democracy survives because we recognize that there is something more important than any one campaign.”

President Obama was also critical of Trump’s affinity for Russian President Vladimir Putin. Speaking from the Rose Garden on Tuesday, Obama said he’s rarely surprised by Trump these days, but he has been surprised by Republican leaders’ response to his stance toward Russia. Obama admitted that his responses to a reporter’s question about Trump’s feelings toward Russia were much more subdued than they tend to be on the campaign trail. In his response, Obama disagreed with any characterization that the U.S. has “improperly challenged Russian aggression or have somehow tried to encroach on their legitimate interests.”

Obama said Russia needs to be a part of the “solution” on the world stage given the country’s military prowess, but said the U.S. will continue to call Russia out when its actions undermine international norms.

“Mr. Trump rarely surprises me these days. I’m much more surprised and troubled by the fact you have Republican officials who have historically been adamantly anti-Russian … now supporting and endorsing his positions,” Obama said. “It’s quite a reversal.”

During the press conference Obama and Italian Prime Minister Matteo Renzi, who is in town for a state dinner, also answered questions about Clinton email leaks, the Italian constitutional referendum, the ongoing military offensive in Mosul and issues affecting Europe. 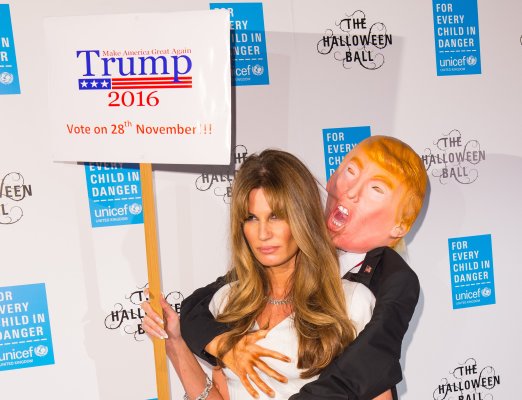