Dozens of women, many of them sexual assault survivors, gathered in front of Trump Tower Tuesday morning to kick off a series of nationwide protests urging women to abandon the Republican Party and demanding that GOP leadership un-endorse Donald Trump.

Clad in black, banging on pots and pans, and singing chants like “Trump thinks he runs this town / Pussy came to shut it down,” the protesters sat in front of Trump Tower holding signs like “Don’t tread on my pussy” and “Grab my pussy, muthaf-cker I dare you.”

The gathering, led mostly by women of color, was half-protest, half-consciousness raising, featuring sexual assault survivors sharing their outrage at Trump’s recent comments about women and several musical performances. The #GOPHandsOffMe protests are scheduled for Tuesday in cities all over the country, including Washington, D.C.; Denver; Philadelphia; Seattle; Miami and Las Vegas.

One survivor stood up and told the group that she was having a hard time explaining Trump’s comments to her 12-year old daughter. Another made a speech slamming the GOP for failing to take responsibility for “what they created.”At one point the protesters “took a knee” in solidarity with Black Lives Matter, in homage to Colin Kaepernick’s protest during the national anthem. Another protester, seemingly overcome with emotion, stood up and belted a stirring gospel rendition of Sam Cooke’s civil rights anthem “A Change Is Gonna Come,” during rush hour on 5th Avenue.

“For me, it’s been a breaking point,” says Nikki Fortunato-Bas, a rape survivor from Oakland, Calif., who says she has had to have difficult conversations with her young daughter about Trump’s rhetoric. “I can’t watch anymore, I have to do something.”

Trump has taken a major hit with women voters ever since the release of an Access Hollywood tape earlier this month in which he can be heard bragging that he can “do anything” to women, even “grab them by the pussy.” High-ranking Republicans such as Paul Ryan and Reince Priebus have condemned Trump’s comments, and while some Republicans have formally rescinded their support, most of his GOP backers have stood by him.

To these women, any support for Donald Trump is a personal insult. “Listening to fellow survivors talk about how Donald Trump treated women’s bodies was a real punch in the gut,” says Autumn Leonard, a survivor and yoga teacher who attended the protest. “Some people are walking around with open wounds inside them.”

Leonard says talking to her young daughter and son about Trump is the hardest part. “I don’t know how to say to my kids, ‘someone who doesn’t respect the safety of your body could be in charge of your whole damn life.'”

Organizers said the protests are designed to “hold the GOP to account for the racist, sexist, and xenophobic policies that have led to the Frankenstein of Donald Trump,” says Agunda Okeyo, an activist, writer, and producer who helped organize Tuesday’s event. “He gives a corporeal quality to it,” she says.

And some of the protesters say that the act of coming together to oppose Trump has helped them find an outlet for their frustration at the events of the past few weeks. And the reaction to Trump’s comments has brought some solidarity to a group of survivors who now feel they have a common enemy.

“Nobody feels like I’m some weird broken misfit and it’s all my fault,” says Leonard. Fortunato-Bas agrees. “The positive is that women are realizing we’re not alone,” she says. 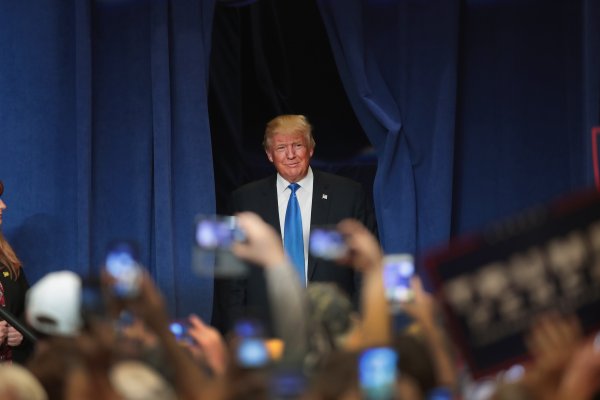 How Trump's Ethics Plan Stacks Up to Clinton's and Obama's
Next Up: Editor's Pick