Neither at War Nor at Peace, Colombia's FARC Rebels Watch and Wait

For the rebels of the Revolutionary Armed Forces of Colombia (FARC), there are no military drills, no target practice, no training in building land mines at this guerrilla camp in southern Colombia. Instead, the day’s main activity is a lecture about plans for the rebels to disarm, form a left-wing party and seek power through elections. “Comrades: To do this we must be prepared to express our political ideas to the masses,” says Federico Nariño, 50, a mid-level FARC commander. “This is how we will triumph.”

The FARC’s transition to legal politics has been the ultimate goal of every Colombian government since the war began 52 years ago. Finally, peace was apparently sealed last month when President Juan Manuel Santos and FARC leader Rodrigo Londoño signed a landmark agreement for the rebels to demobilize, formally ending the war. But in a shocking turn of events, Colombians rejected the accord in a binding referendum on Oct. 2. Now, the entire peace process—with its timetables for Colombia’s Congress to pass an amnesty law for rank-and-file rebels, for the FARC to demobilize and for the government to launch reconstruction projects in former conflict zones—is frozen.

Read More: What to Know About the Origins of Colombia’s FARC

A chastened President Santos is now meeting with opposition politicians who want tougher sanctions against FARC commanders who have been accused of massacres, kidnappings and other crimes. But it could take months for a modified peace accord to emerge. All this has led to a surreal state of affairs for the 5,800 FARC rebels based in jungle and mountain camps throughout Colombia. They are ready to disarm an end a war that has killed 220,000 people and uprooted millions from their homes. Just last month, the FARC ratified the accord at a week-long conference that turned into a peace celebration with musical groups, dancing and plenty of beer and rum. But until the politicians in Bogotá reach a compromise—and can get the Colombian people on board—they are stuck, neither at war nor fully at peace. When the peace agreement was rejected in the referendum, 27-year-old FARC member Milena Reyes, “I had a lump in my throat because I could feel all my dreams just falling apart.”

A recent visit by TIME to a FARC camp in Yari Savannah showed how this trapped transition is reflected by the rebels’ appearance. Many don green military pants but combine them with colorful t-shirts. One rebel, Mateo Pérez, says he had to request larger sizes after putting on about 50 pounds due to the FARC’s newly sedentary lifestyle. Leaving weapons unattended used to result in punishments like ditch digging. But instead of lugging their automatic rifles around the camp, about half of the guerrillas leave them in their bunks. Rebels were also prohibited from getting pregnant and stories abound of female guerrillas—who make up about one-third of the FARC’s ranks – forced to have abortions rather than giving birth in the jungle. But a number of rebels are now expecting babies.

Solangy Ramírez dropped out of school at age 13 to join the FARC. Now 27, she is a nurse who has spent more than a decade patching up wounded colleagues. “I’d like to study medicine,” she says. Such possibilities were unimaginable when the war was raging. The FARC rose up in the 1960s to fight for land reform and social justice. Despite the collapse of communism, profits from drug trafficking, kidnappings for ransom, extortion and illegal gold mining allowed the FARC survive well into the 21st century.

Read More: This is What Members of Colombia’s FARC Rebel Army Carry in Their Bags

But the FARC never came close to seizing power. After three failed attempts at peace talks, the FARC agreed to a new round of negotiations in Havana, Cuba, in 2012. The talks lasted four years, culminating on Sept. 26 with the signing of a final peace accord. The next step was for the guerrillas to start turning over their weapons to U.N. inspectors. Instead, the “no” vote topped the “yes” vote by a slim margin in the referendum. Leading the campaign against the accord was Álvaro Uribe, a former president who during eight years in office led a ferocious military campaign against the FARC that helped drive them to the bargaining table. Now a senator, Uribe is insisting that rebels accused of war crimes and drug trafficking be banned from holding political office. He also wants them to be judged within Colombia’s existing legal system rather than through a parallel, transitional justice system that was to be set up under the peace agreement.

In an interview at the rebel camp, Carlos Antonio Lozada, a member of the FARC’s ruling secretariat who helped negotiate the accord, says the FARC would accept tweaks but not wholesale revisions to the original agreement. President Santos, who won this year’s Nobel Peace Prize for signing the accord, delivered a similar message in a speech last week and urged a quick resolution: “We can’t start all over again with a clean slate… Time is conspiring against peace.”

Santos has extended a two-month-old bilateral ceasefire until the end of the year. But ceasefires can be broken by a chance encounters between army soldiers and guerrillas. Although the FARC stopped military training and recruitment last year, “we are prepared for anything,” says Byron Yepes, a grizzled FARC veteran at the camp. “If they don’t let us get into legal politics we will have to continue with the war.”

But Lozada, the FARC negotiator, is confident a deal to save the peace process will emerge. So is Nariño, who ends his lecture to the FARC troops on an uplifting note. “Right now we are in a sort of limbo. We have to wait to see what happens,” he said. “But we are betting on peace.” 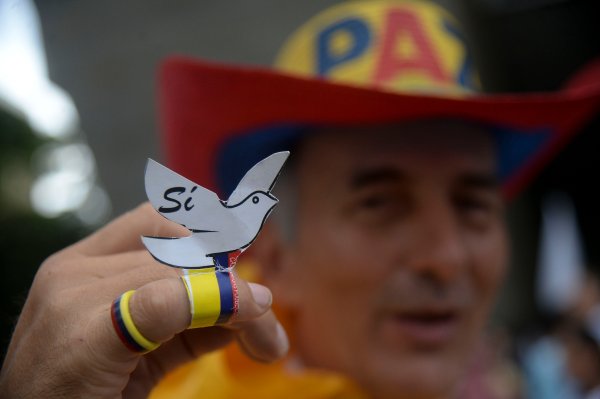 How Colombia's Failed Peace Deal Helped Change My Understanding of War
Next Up: Editor's Pick