Toussaint, patient with cholera symptoms, receives medical attention at the health center of Les Anglais, in Les Cayes in the southwest of Haiti on Oct. 16, 2016.
Hector Retamal—AFP/Getty Images
Ideas
By Conor Shapiro and Lynn Black
Conor Shapiro is President and CEO of the St. Boniface Haiti Foundation
Lynn Black is a physician at Massachusetts General Hospital and a director on the board of the St. Boniface Haiti Foundation

The military helicopter dropped us off in Les Anglais on the southern peninsula in Haiti five days after Hurricane Matthew’s 145 mph winds made a direct hit. We were the first responders of any kind to arrive in the entire western region of Haiti after the storm had cleared. Previous flyovers had reported that Les Anglais, a community of 40,000 people, appeared to be wiped away entirely. But we were actually met by several hundred people very much alive—and in desperate need of help.

The deputy mayor, civil protection officer and a lone doctor moved with us through the crowds to the local clinic. There was overwhelming destruction—as if the city had been struck by a powerful bomb destroying everything in its wake. In total, 179 people had died and more than 700 had been injured, many seriously, just in the center of town. And it is still unknown how many more are out in the surrounding areas with no access and no voice. Only 82 out of 4,000 homes were left, and there was no clean water and almost no food. The food that had been stored was wet and when put out to dry, had spoiled.

The clinic was partially standing with a depleted medication supply and no material to care for the traumatic wounds. Unattended wounds had been festering for days. A massive cholera outbreak was also imminent: Les Anglais had already had 24 cases in the first five days. The cholera ward was sadly caring for children close to death, and could merely cover the body of a 59-year-old father who had died of cholera with a tattered sheet.

As the days have progressed in Les Anglais, a clearer picture of the overall catastrophic situation on the Southern Peninsula has emerged. Les Anglais represents all the communities of the western southern peninsula that have been cut off. About 1.4 million people are in need of immediate assistance. But the impact goes way beyond the immediate needs and beyond just numbers.

We met Venus St. Fleur, a subsistence farmer in Fond des Blancs, our own community further inland on the peninsula. Her corn crop, weeks away from harvest, was completely destroyed by the storm. As a direct result of this agricultural apocalypse, the vast majority of the population will no longer have food to feed their children or have money to pay for school. This will inevitably lead to widespread famine. Our team at St. Boniface Hospital admitted Charlisena Lubin, a 14-year-old girl who was paralyzed from the waist down after being hit by a falling tree branch during the storm. She had to wait days for care and had to travel for hours. There were no other functioning healthcare facilities near her home.

We were both witness to the horror of the 2010 earthquake. This current emergency relief effort feels wildly different. Although there are a few international organizations trying to ramp up aid efforts, the international community’s response has so far been strangely muted. The U.N. put out an emergency appeal for about $120 million for lifesaving relief following Hurricane Matthew, but only about 12% of that request has been committed. Clearly, the world is not paying enough attention to the growing tragedy.

Is it our obsession with our own national politics here in the U.S.? Is it our lack of ability to turn statistics on the evening news into the stories of real suffering people? Are people losing faith in our ability to effectively respond to disasters in Haiti? Are we tired of hearing about the struggles of this small island? Regardless of the real reasons, shame on us for not shining a brighter light on the devastation caused by this powerful storm and for not stepping up to help our neighbors, 90 minutes by air from Miami, recover and turn toward rebuilding. If not us, then who?

This is indeed a complex humanitarian disaster, and complexity can be scary. But what has been forgotten in this never-ending news cycle is that there are simple things that the international community can do to help. Haiti needs food, seeds, clean water, shelter and medical care. The international aid community needs to partner with local organizations and local governments that are organized and know the best way to deliver aid to their respective neighbors and communities. But most of all, we need to make this an immediate priority. People—fathers, mothers, children—will likely die unnecessarily if aid doesn’t arrive quickly. The time to act is now. 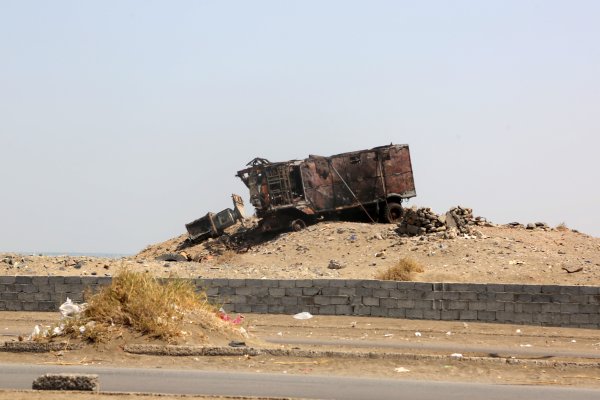 U.S. Support for the War in Yemen Is Indefensible
Next Up: Editor's Pick