Target has pulled several scary clown masks off its shelves about two weeks before Halloween amid a worldwide phenomenon that has left many people paranoid and fearful of clown sightings.

The retailer said it began removing some clown masks from stores and from its online selection last week due to “sensitivity to the issue at hand,” according to ABC News. However, happier, less frightening clown masks are still available for purchasing, the company said.

“Given the current environment, we have made the decision to remove a variety of clown masks from our assortment, both in stores and online,” Target spokesperson Joshua Thomas said in a statement.

The creepy clown craze, which has lasted for more than a month, has led to reported sightings of scary clowns in more than two dozen states. It recently spread to other countries, including England and Canada.

Last week, Goodwill-Suncoast announced it has stopped selling clown costumes in its 18 stores in Florida to be “sensitive” to customers’ fears. McDonald’s also reacted to the phenomenon by temporarily stopping its iconic clown mascot, Ronald McDonald, from making appearances at community events. 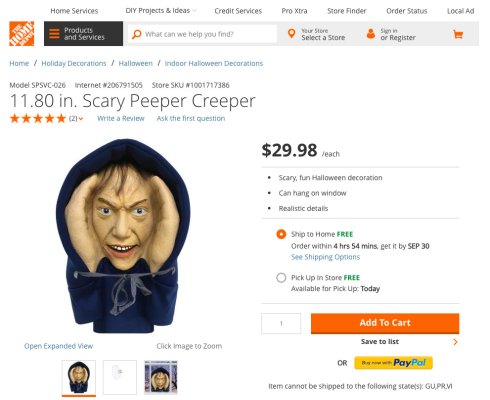