What's Going On With Julian Assange and WikiLeaks? Here Are 4 Theories

WikiLeaks has claimed that its co-founder, Julian Assange, has had his internet access “intentionally severed by a state party” and the team have “activated the appropriate contingency plans”.

The whistleblowing group’s claim comes less than two weeks after Assange, who has been living in the Ecuadorean Embassy in London for more than four years, said via a video link to a news conference in Berlin that the site would be releasing documents “significant to the U.S. election” in the build up to the Nov. 8 vote.

Assange was granted asylum by Ecuador in August 2012 following allegations that he raped and molested two women while he was attending a conference in Sweden, which he has denied. The 45-year-old has so far avoided possible extradition to the Scandinavian country, but Swedish prosecutors were reported to be interviewing him at the embassy today. It is unclear whether or not this will still go ahead following Wikileaks’ latest claims.

The internet has gone wild with possible theories about Assange’s supposed internet severing. Here are four of the most captivating ones:

On Sunday, before Wikileaks tweeted about Assange’s internet access being “intentionally severed,” the verified account, which has 3.7 million followers, sent three tweets which they called ‘pre-commitments’ and appeared to be written in an encrypted code.

This fueled speculation that Assange had died, and the tweets were a “dead man’s keys” or “dead man’s switch” – encryption codes revealing highly classified secrets to be unveiled in the case of his death. “Praying for Julian. I hope he isn’t dead. This does look like an emergency dead man’s switch,” wrote one Reddit user.

But these tweets likely do not mean Assange is dead, Gizmodo reported. “‘Pre-commitment’ in this case is a references to a cryptographic scheme to prevent unreleased information from being tampered with. Essentially those unique codes are proof to anyone reading the documents in the future that their contents remain unchanged: alteration to the leaks will likewise alter those 64-character codes,” the article explained.

In any case, the WikiLeaks account has tweeted several times since the “pre-commitments” went out with no mention of its founder’s supposed death.

2. John Kerry is about to be WikiLeaks’ next victim

The first WikiLeak ‘pre-commitment’ tweet mentioned John Kerry, the Democratic Party politician who is the current United States Secretary of State. This has sparked rumors that the site is about to release Kerry’s emails, following its publication of troves of Democratic National Committee (DNC) documents in July and, more recently, emails from the account of Hillary Clinton advisor John Podesta. The U.S. government says the accounts were hacked, but WikiLeaks will not confirm how it obtained the documents.

Roger Stone, the former Trump advisor known for his outspoken comments, has got involved in this theory. “John Kerry has threatened the Ecuadorian President with ‘grave consequences for Equador’ if Assange is not silenced,” he tweeted, adding “Reports the Brits storm the Ecuadorian Embassy tonite while Kerry demands the UK revoke their diplomatic status so Assange can be seized.”

3. The U.S. government has severed Assange’s internet access
Reddit users have been sharing the powerful poem “First they came…” written Pastor Martin Niemöller about the cowardice of German intellectuals following the Nazi’s rise to power.

Many have been connecting Assange’s alleged internet severing with his release of sensitive material on Hillary Clinton’s campaign for president. Clinton’s team has suggested WikiLeaks is working with the Russian government to help Donald Trump’s chances of winning.

“So far there had been no intervention by outside entities to attempt to silence Julian Assange, so the latest intervention “by a state party”, if confirmed would be a notable escalation in the status quo, and suggests that Wikileaks may have even more damaging revelations to come,” reports Zero Hedge.

It’s bizarre, but true: on Saturday, the former Baywatch star surprised many by paying Assange a visit at the Ecuadorian embassy, bringing with her some bags from the popular U.K. sandwich chain Pret A Manger.

The Canadian-American actress, 49, came bearing gifts for Assange, saying she supported him and had concerns for his family and well-being. She told the U.K.’s Press Association that her gifts included “a nice vegan lunch and some vegan snacks.” Assange was apparently unimpressed with the meal choice. “He said I tortured him with bringing him vegan food,” she added.

Anderson’s visit has sparked possibly the most ridiculous of all the theories – that she killed him with her food. “GET ASSANGE OUT OF THERE AND INTO HIDING. How do we know that Pamela Anderson isn’t working 4 someone to set up him up?” wrote one Twitter user. 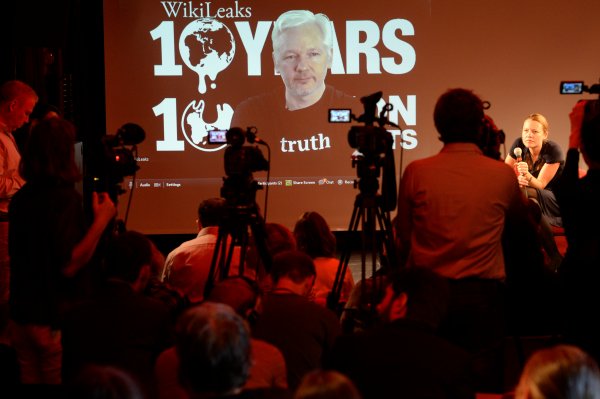