Nigerian girls kidnapped by Boko Haram meet with their families after they were released during a ceremony at a Church in Abuja, Nigeria, Oct. 16, 2016.
Sodiq Adelakun/Anadolu Agency/Getty Images
By Kevin Lui

Following the release of 21 out of over 200 schoolgirls kidnapped in 2014 from their school in Nigeria, a faction of the militant group Boko Haram may be willing to free more.

Reuters reports that, according to a spokesperson for Nigeria’s president, the same Boko Haram faction that negotiated the first release last Thursday is holding 83 other kidnapped schoolgirls.

Allegations that captured Boko Haram fighters were swapped for the freedom of the 21 girls freed last week were denied by a Nigerian minister, according to the report.

The girls were part of a group of over 200 abducted by Boko Haram in April 2014 from their school in Chibok, Nigeria, when militants attacked their school during the night.

The mass abduction sparked a global outrage and a call to action at that time, centered around the hashtag #BringBackOurGirls. 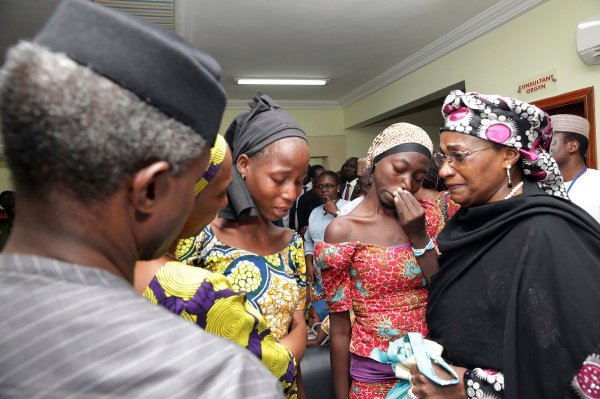 Boko Haram Releases 21 of the Missing Chibok Girls
Next Up: Editor's Pick