What the Shooting of Alfred Olango Says About the State of Black Refugees in the U.S.

Winnie Olango, center, sister of Alfred Olango, is consoled by two friends before a march in reaction to the fatal police shooting of her brother, in El Cajon, Calif., on Oct. 1, 2016.
Denis Poroy—AP
Ideas
By Opal Tometi and Carl Lipscombe

Carl Lipscombe is a policy advocate, researcher and attorney and serves on the senior leadership team at the Black Alliance for Just Immigration

“I called you to help me, but you killed my brother.” The cries of loved ones, like this quote from the sister of Alfred Olango, a 38-year-old Ugandan refugee who was shot and killed by police last month in California, have become a familiar part of a notorious scene. Too often a call for help ends with the murder of an unarmed black person at the hands of law enforcement.

During the past few weeks, the police killings of Tyre King, Terence Crutcher and Keith Lamont Scott have spurred yet another wave of protests needless shootings and solemn vigils that unite communities experiencing grief. But Olango’s case is different—not just because it received scant attention—but because it raises a challenge that the country has yet to adequately address: the criminalization of black migrants.

Olango arrived in the U.S. as a child refugee from Uganda in 1991. His family lived in a refugee camp after fleeing war and persecution. Olango’s mother describes him as a “good, loving, young man,” who enjoyed soccer and cooking. He worked in manufacturing and as a cook and hoped to eventually open his own restaurant.

These dreams came to an end when El Cajon police shot Olango outside of a strip mall within one minute of arriving at the scene. Olango’s sister had called the police because she said she was worried about his safety.

After the shooting, the police were quick to point out Olango’s criminal record. He had been arrested previously for alleged non-violent offenses, including a drug offense and a driving under the influence conviction, and faced deportation on two occasions. Olango was detained by the Immigration and Customs Enforcement for a period but was released in compliance with a Supreme Court ruling barring indefinite detention of immigrants whose countries do not grant travel documents or permission to return.

As a result of a set of laws passed in 1996, nearly two dozen criminal and noncriminal offenses, including drug offenses, can subject immigrants to deportation. According to a report entitled The State of Black Immigrants, recently released by the Black Alliance for Just Immigration (BAJI) and NYU Law School’s Immigrant Rights Clinic, these laws disproportionately affect black migrants. In fact, despite making up only 7% of the U.S. immigrant population, black immigrants comprise 21% of those facing deportation as a result of contact with the criminal justice system. And black immigrants make up a rising share of black people experiencing criminalization at the hands of police, immigration, and other law enforcement agencies.

Just 30 miles away from the strip mall where Olango was killed, thousands of Haitian migrants fleeing harsh conditions could face ICE detention.

Olango’s case is strikingly similar to that of David Felix, an unarmed Haitian immigrant who was killed by police officers in New York City last year. Felix had also spent time in an ICE detention facility and was ultimately released. After the shooting, police officers suggested that Felix was uncontrollable, aggressive and uncooperative due to a mental illness.

“Yes, we are refugees,” Olango’s mother said. “But that doesn’t justify that we should be killed because of being refugees … I didn’t know that the next time it would be me.”

Black immigrants suffer the repercussions of their blackness and their immigration status. They not only risk dying on the street after a brief police encounter, but they also risk detention and deportation.

As black immigrant families increasingly recognize and experience police violence, it’s important that racial justice and immigrants’ rights advocates begin to address the intersectional impact of mass criminalization. To put it simply, mass criminalization is an immigration issue and detention and deportation are black issues. For nearly 10 years, BAJI has worked to build bridges between African American and immigrant communities and raise awareness around issues affecting black immigrants, and these issues are finally beginning to gain traction.

The stories of Olango, Felix and countless others illustrate the need for society to look beyond policing and toward mental health and other rehabilitative services as models for public safety. Efforts like the Safety Beyond Policing campaign in New York, led by BAJI, seek to promote these alternative solutions. Additionally, in their recently released platform, the Movement for Black Lives took a sharp stance on immigration, and immigrants’ rights activists are increasingly discussing the need to join forces with Black Lives Matter activists.

But more must be done to address the unique forms of criminalization—incarceration, detention, deportation and death—facing black immigrants.

We must continue to protest and raise the profile of black immigrants’ lives that have been lost to police violence. We must urgently address the mass detention and deportations facing black immigrants. We must commit to changing U.S. immigration policy and creating an immigration system that values dignity, justice and human rights. And perhaps most important, the racial justice and immigrants’ rights movements must come together to end criminalization in all its forms. 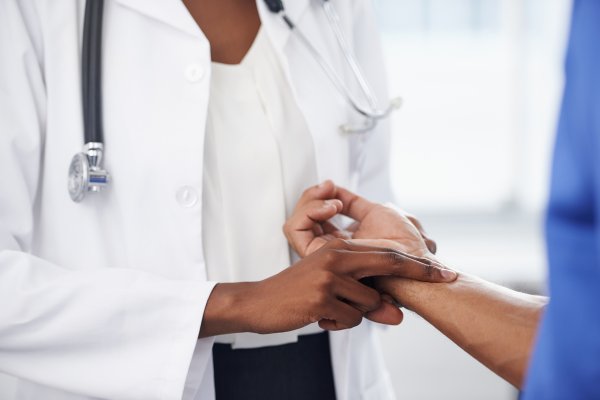 Black Women Are Doctors, Believe It or Not, America
Next Up: Editor's Pick