When I was four years old, my father cracked me over the head with a rum bottle.

It’s one of my earliest memories. I was defending my mother from one of my dad’s drunken, abusive tirades, and I was bold enough to step between them to protect her.

“Don’t you cry.” That was all he said after he hit me.

Crying wasn’t OK. Emotions were taboo. I—and millions of other boys—were taught to bottle up our feelings and mind our own business—especially when it came to relationships. Too often in our society men are conditioned to never be too emotional.

That’s the culture we need to change if we’re going to end domestic violence—because this is not a problem that women can solve alone.

To this day, one of my biggest regrets is not addressing a domestic violence situation I knew about in college. I was friends with a girl whose boyfriend was abusive, and all my guy friends knew it, too. Instead of pulling him aside, or asking her if she needed help, we didn’t say anything to either one of them because it would have been an uncomfortable conversation to have—and we didn’t think it was our business. Thankfully, her friends rallied around her and eventually convinced her to get out of the relationship.

In order to have healthy relationships—and a healthy life—men have to be open to talking about and tackling difficult issues like domestic violence. Whether it’s with fathers, uncles, friends or coworkers, we have to take responsibility for starting that conversation. And we as men need to understand that being able to admit vulnerability is a strength, not a sign of weakness.

Before I opened up about the abuse in my childhood, I worried about whether people would view me differently, whether my coworkers would view me as a weak leader, whether my family would be upset about airing my past. The “macho male” mentality crept in.

Going to therapy helped. It changed my life—and the lives of many people around me. Talking about my experience encouraged my male family members to talk about domestic violence to their own children. But most important, it helped me heal, and it helped me realize the importance of talking to my own sons now—before they’re old enough to enter into serious relationships of their own.

I’m fortunate to work for a company that is at the forefront of this domestic violence conversation. Since 2005, The Allstate Foundation, through its Purple Purse program, has invested upwards of $50 million to help more than 800,000 victims break free from abusive relationships through a financial curriculum designed for domestic violence survivors. We did this because we know financial abuse happens in 99% of abusive situations. It took my mom years of hiding away money in a secret safety deposit box until she had enough money to float us for six months, so she could take me and my brother and leave my dad.

There are programs today, like MEND, that educate boys and men about healthy masculinity and gender violence. MEND works by engaging high school sports coaches, clergy and business leaders in the domestic violence conversation. What these influential community leaders learn from the program, they pass on to their student athletes, congregations and employees, thereby expanding awareness that’s so critical to ending violence against women.

Looking back, it must have been incredibly difficult for my mom. If someone had only spoken up—maybe even pulled my father aside—maybe things would have been different. Maybe the abuse wouldn’t have gone on for so long.

Sadly, more often than not, men know what’s going on but ignore the issue. Or we wrongly assume that it happens to other people—certainly not our friends, sisters, daughters. And we can’t imagine our brothers or friends would ever abuse their girlfriends or wives. But with one in four women experiencing domestic violence in her lifetime, it’s likely that many of us know someone who’s been affected.

As men, we need to start recognizing that domestic violence is our issue to solve. It’s up to us to speak up when we see an abusive relationship. If we know a victim is in trouble, we need to call the police.

It’s also our responsibility to talk about this issue and teach others what a healthy relationship looks like. It doesn’t matter how you start that conversation. What’s important is having the courage to do it. 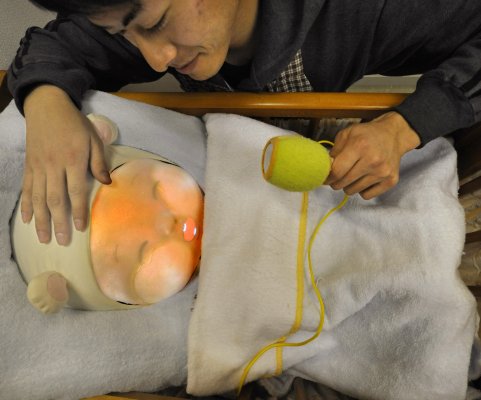 Japan Is Using Robotic Babies to Encourage Population Growth
Next Up: Editor's Pick