U.S. Support for the War in Yemen Is Indefensible

A destroyed vehicle is pictured in the Yemeni port city of Hodeidah on Oct. 13, 2016.
AFP/Getty Images
Ideas
By Ray Offenheiser
Ray Offenheiser is the President of Oxfam America.

Not even funerals are sacred in a time of war.

Last Saturday, as hundreds of Yemeni mourners waited to pay their respects to a beloved elder, warplanes obliterated the funeral hall they were gathered in killing more than 140 people and wounding more than 525. This is not an isolated incident but rather the latest tragedy in Saudi Arabia’s military intervention—facilitated by U.S. intelligence sharing and aerial refueling.

These are your tax dollars at work.

The humanitarian impact of the bombing campaign is staggering—no civilian is left unaffected. Yemen, the poorest country in the Middle East before the start of this conflict, is now on the brink of starvation. The numbers do not sufficiently represent the desperation that this conflict has wrought, but they’re a start. More than 19 million people do not have access to clean water, 14 million people are suffering from hunger and malnutrition, and more than 3 million Yemenis have been driven from their homes.

We live in a world where the rules of war are continually flouted and the U.S.-supported Saudi-led campaign in Yemen is no exception. In the more than 3,000 strikes since the conflict began, civilian sites are routinely in the line of fire. Hospitals, schools, factories, homes, markets—there is no safe space in Yemen today. And with Saudi Arabia’s purchase of more than $115 billion in U.S.-manufactured military equipment approved since the war in Yemen began—including air-to-ground munitions as well as tanks—the jeopardy civilians are facing is marked with a deep American imprint.

Newly disclosed government documents reveal that State Department lawyers warned that the U.S. could be implicated in war crimes for supporting a Saudi-led air campaign in Yemen.

The sale went ahead anyway.

Now, in the wake of Saturday’s attack, the U.S. announced that it will immediately review its support to the Saudi-led coalition. This review cannot be a smokescreen for inaction or a place holder for responsibility. As of now, it is unclear how the review will unfold, what the timeline is, and who will be responsible for carrying it out. And U.S. support for the coalition will continue even though the very need for a review casts a long shadow on anything that takes place until it is finalized.

The lack of transparency from the get-go is an insult to the families of the massacred, who are still burying their dead, and for the families of those wounded in the attack desperately trying to seek assistance for their loved ones. At the very least, the U.S. should suspend its support for the campaign until the review is completed.

Deference to Saudi Arabia has cost America its moral footing. Many Members of Congress agree. Last month, 27 senators—including top leaders—voted to block a sale of tanks and other defense equipment to the Kingdom in a direct rebuke to the Obama administration. While the measure did not pass, it was a sign of the growing realization in Congress that U.S. support for the war in Yemen is indefensible.

To be clear, the Saudi-led coalition is not the only ones responsible for the violence and loss of life. All sides involved in this horrific war are responsible for the serious violations that have led to this humanitarian catastrophe. But the U.S. is only supporting one side.

In the end, one has to wonder how this will ultimately reflect on President Obama’s legacy. He and his foreign policy leadership will surely look back upon the decisions they’ve made about Yemen with regret in light of the carnage and the daily assault on human dignity.

Each day the U.S. supports this war, with every air strike that hits a civilian site, every civilian killed, maimed or going hungry; with every U.S. weapon used in Yemen and every warplane refueled that kills or wounds civilians, the U.S. tarnishes its reputation in the world. Some things should still be sacred. 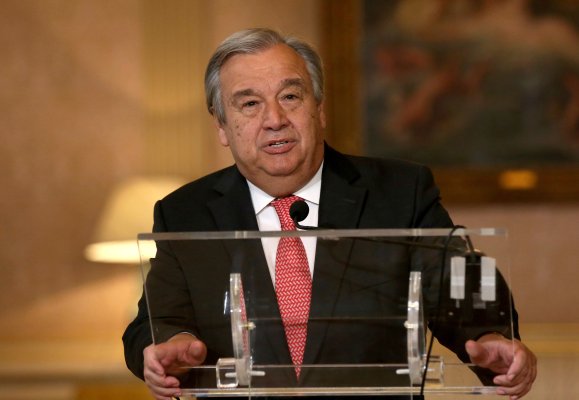 This Is the Biggest Challenge Facing the Next U.N. Leader
Next Up: Editor's Pick