First lady Betty Ford, right, answers questions from the press prior to her tour of the Guttman Institute for Early Detection of Breast Cancer in New York City on Nov. 7, 1975.
MCT / Getty Images
By Sascha Cohen

Breast Cancer Awareness month comes every October, and the display of pink ribbons is hard to miss. The contemporary fight against breast cancer has succeeded in promoting visibility of the disease, in honoring those who have died from it and in giving patients resources for navigating their diagnosis, as well as a sense of hope for the future. But this did not happen overnight, nor did it originate with the pink ribbon campaign conceived in the early 1990s.

That breast cancer garners an impressive amount of social awareness is no accident; it is the result of decades of committed activism beginning in the 1970s, and was driven in large part by the spirit of the women’s liberation movement. Until this point in time, breast cancer was an “unspeakable” condition that women experienced privately and silently, with shame rather than social support. It took the acts of individual women speaking out about cancer, as well as feminist organizing that targeted the relationship between female patients and the male-dominated medical establishment, for the issue to go public and become less stigmatized.

During the 1970s, second wave feminism helped spawn the women’s health movement, which was meant to empower women to demand greater knowledge about their own bodies, and freedom to take charge of their reproductive and sexual health. Feminists challenged what they saw as a common power dynamic in medicine in which patronizing male doctors claimed authority over passive female patients by dictating their care and denying them participation in medical decision making. This led to the publication of Our Bodies, Ourselves by the Boston Women’s Health Collective in 1973, as well as the creation of educational projects to teach women how to examine themselves and advocate for their own healthcare needs.

The lack of choices and autonomy for women was particularly evident with issues like childbirth, sterilization and abortion, but it also applied to breast cancer. Since about 1900, a woman suspected of having breast cancer would undergo a “one step” operation. A surgeon would perform a biopsy along with a radical mastectomy, and the patient would typically wake up with her breasts, chest muscles and lymph nodes entirely removed, regardless of the size or characteristics of her tumor, or her personal wishes.

One of the first women to protest this standard of care was journalist Rose Kushner, who discovered she had a breast lump in 1974, at the age of 45. Kushner insisted on a diagnostic biopsy followed by a modified mastectomy. “No man is going to make another impotent while he’s asleep without his permission, but there’s no hesitation if it’s a woman’s breast,” Kushner pointed out, echoing the reigning feminist position on sexist double standards in medicine. In 1975, she published Why Me? What Every Woman Should Know About Breast Cancer to Save Her Life.

Kushner’s ideas were initially rejected by cancer experts – one called her book a “piece of garbage” – but over time they became common practice, as research proved that women with early-stage disease could safely conserve more of their breast tissue. Kushner was eventually appointed as the first member of the National Cancer Advisory Board by President Jimmy Carter.

Several prominent women followed Kushner’s lead in speaking out about breast cancer during the decade. When she was 56 years old and about to become the First Lady, Betty Ford had a mastectomy after being diagnosed with the disease. She held a press conference in September of 1974, sharing the details of her story with the public.s As a result, millions of women examined themselves and scheduled screenings with their doctors, which led to a spike in reported incidents of breast cancer known as the “Betty Ford blip.” One such woman was Happy Rockefeller, wife of Vice President designate Nelson Rockefeller, who discovered her own malignant lump just two weeks later.

As TIME explained, Ford and Rockefeller’s candidness helped many others confront “a little understood disease that was once discussed only in whispers.” Other notable women who came forward about their experiences with breast cancer in the 1970s included writer Babette Rosmond, actor Shirley Temple Black, chef Julia Child and NBC news correspondent Betty Rollin.

During the 1980s, AIDS eclipsed cancer as the major health crisis commanding national attention. AIDS activists became known for their confrontational style of politics, as groups like ACT-UP staged theatrical guerilla street protests in order to lobby for government research money. Their use of symbolism, in the form of a red ribbon, and their demands for increased federal funding influenced the next wave of breast cancer activism.

The pink ribbon became a symbol of breast cancer awareness as the result of efforts by Self Magazine, the cosmetics industry and the Susan G. Komen foundation in the early 1990s. The concept was first inspired by breast cancer patient Charlotte Hayley, who individually distributed thousands of peach colored ribbons in her community, along with cards that encouraged funding for cancer prevention. When representatives from Estee Lauder and Self expressed interest in her idea, Hayley turned them away because she was worried about the cause becoming commercialized—so they changed the color of the ribbon from peach to pink. The first pink ribbons were handed out at the 1991 Susan G. Komen Race for the Cure in New York City, the same year that saw the founding of the National Breast Cancer Coalition.

Today, activists are pivoting their focus from awareness and early detection towards saving the lives of patients who have progressed to advanced stage IV disease, or metastatic breast cancer. And breast cancer activism has evolved from individual patients voicing their own experiences, to the formation of community support groups for cancer survivors, to political organizing for a cure. It has grown from a small grassroots movement to a widespread network of professional advocacy. Critics point out that, along the way, the struggle against breast cancer has been exploited by companies co-opting the pink ribbon to advertise their own products or bolster their image. But before all of that, it was a movement about giving women the courage to speak openly about their bodies, and the agency to decide their preferred course of treatment when faced with a serious illness. 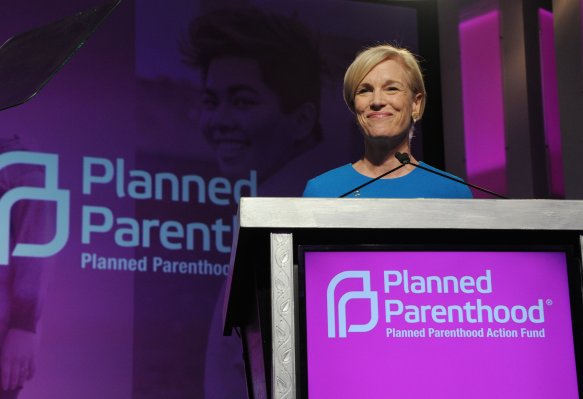 Cecile Richards: Planned Parenthood's Work Is Far From Complete
Next Up: Editor's Pick