The leader of South Africa’s leftist Economic Freedom Fighters (EFF) Julius Malema was served with a court summons on Thursday, accusing him of urging his supporters to trespass, according to a Reuters report.

He is now due to appear in court twice in November to face two charges of contravening the country’s Riotous Assemblies Act — an act that Reuters points out was implemented during the Apartheid era.

Malema has previously said that he wants to seize white-owned land. He posted the following on Twitter after being summonsed:

Once head of the now-ruling African National Congress’s Youth League, Julius Malema was expelled in 2012 for racism and hate speech, and now sees his former patron, President Zuma, as his arch enemy, according to Reuters.

Immediately before the summons, Malema had been at a press conference mobilizing his followers to take to Pretoria’s streets to protest Zuma’s presidency, in part over the President’s failure to follow orders from a constitutionally mandated corruption watchdog over $16 million of state money spent on his private home.

Zimbabwe’s President Robert Mugabe has been praised by Malema in the past for his “resilience, courage, forthrightness and dedication” and his “progressive vision.” 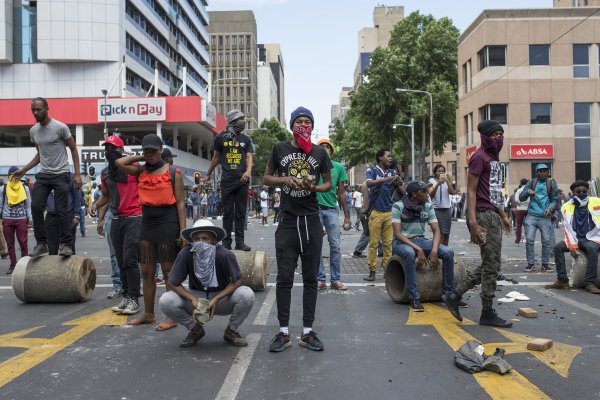 Students Clash With South African Police Over Education
Next Up: Editor's Pick