Last Friday evening around 7 p.m., I sat in my dining hall common room sick to my stomach as I listened to audio of Donald Trump bragging, “Grab them by the p-ssy. You can do anything.” For the next 12 hours, I fumed, I texted friends, I organized voter registration events, and I tried to sleep. It was not the blatant misogyny and sexual violence that struck me (as many know, we are constantly in the process of being hit with these realities) but the lack of response, the tacit approval by many, the dismissal of the tape as “boys being boys” or, as Trump said himself, “locker room talk.” My anger and disgust was focused solely on Trump, ignoring the voice that egged him on and the figure that admonishes Arianne Zucker, “How about a little hug for the Donald?”—a line that turned my stomach over.

The next morning at lunch in Dana dining hall, a friend told me that Billy Bush, that pitiful voice of the patriarchy, was not just a ‘94 Colby graduate but a two-time captain of the lacrosse team during his time here (a fact confirmed by professors here at the time). All at once, the connection between the violence and harassment we face here on Mayflower Hill and the ingrained violence and misogyny in the Trump campaign was all too clear. I was hit with a wave of frustration so deep I actually screamed.

For the past two years, I have worked as a research assistant for the Education Program’s Professor Mark Tappan on the Colby Healthy Masculinity Project, which has the goal of identifying healthy masculine identities and understanding their development. Our work stems from the understanding of our society, including the Colby community, as conducive to a toxic masculine identity—one that emphasizes aggression, dominance over women, homophobia, etc. (all traits Trump has displayed “bigly” this campaign season). Tappan’s class, “Boys to Men,” has made many men conscious of the violence they participate in. These discussions have propelled some to activism. Consequently, Colby is home to initiatives such as Mules Against Violence, Party with Consent, and Mentors in Violence Prevention, all of which include some emphasis on toxic masculinity’s role in perpetuating rape culture.

While this feminist work is present on campus, it often seems to be working against a brick wall of hypermasculinity, as we read about incident after incident of sexism and homophobia in BIPR reports and the (now inaccessible) Civil Discourse email list-serv. We hear about violence, we are saddened, we are grateful for the “good men” that exist, and we continue on our way. What else is there to do on a campus that seems to privilege the men who are the loudest?

After the tapes were released this weekend, Colby can no longer pretend that our campus environment is not one of hypermasculinity and sexual violence. Our campus culture, which both the student body and the administration have a role in developing, has produced a man who is now being nationally shamed for his role in the tapes. The Colby Plan’s mission states, “It is hoped that students will become […] thinkers who are welcoming of diversity and compassionate toward others.” Bush’s camaraderie with Trump and his approval of sexual violence show that Colby failed in producing a man of compassion or dignity, let alone one who is welcoming of diversity.

I have already heard that because Bush graduated more than 20 years ago, his connection to Colby is insignificant. But if you ask any person who has attended Take Back the Night, who has felt uncomfortable and unsafe in the presence of overly aggressive men on a Saturday night in the apartments, who has been cat called running along Mayflower Hill, or who has been forced to navigate the Title IX reporting process, they can tell you that the connection is anything but insignificant. Colby is a breeding ground for hypermasculinity and the violence that comes with it.

I write this not to dishearten but to call to action men on this campus. It is not enough to express disgust at the actions of our fellow mule and Donald Trump. It is not enough to like an article that your feminist friend has posted on Facebook. We need men who are willing to act. Volunteer for the Hillary campaign to ensure the next administration continues the work of progress. Speak up when you hear words like “pussy” and “bitch” and name this as violent language. Do something. The silent majority does not just stand with Trump; they stand with sexual violence, with misogyny, and with sexism.

This is also a call to the Colby administration. Acknowledge that Bush is a graduate of our institution. Acknowledge that our campus culture produces and enables violence against women. Finally, support the initiatives that Colby community members are creating to work against hypermasculinity. Every Colby student should learn the tools to critique gendered violence and sexism. Let’s make sure that 22 years from now, we are not reading about a current Colby student assuring a dangerous bigot that he can do “whatever you want” to women.

This article originally appeared on The Colby Echo. 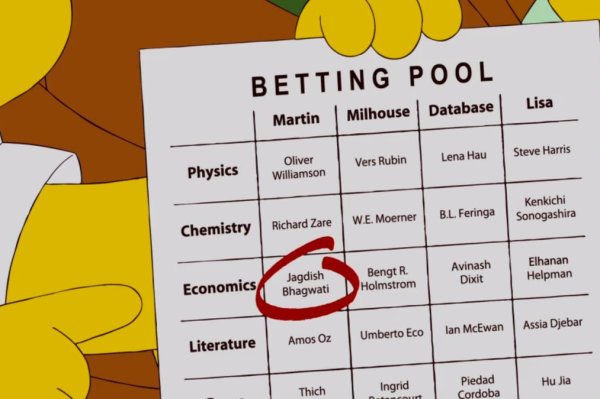 The Simpsons Also Used Psychic Abilities to Get Our Nobel Prize Winner Right
Next Up: Editor's Pick