Why Glenn Beck Can't Get to Yes on Donald Trump

Conservative media personality Glenn Beck briefly considered a vote for Hillary Clinton, but decided it was a step too far. That doesn’t mean he will vote for her Republican rival, Donald Trump, either. He says that would not be moral.

In an interview with TIME, the former Fox host and best-selling author mulled the choice he—and millions of other conservative voters—face this fall in the voting booth. With more than a tinge of sadness, Beck says that neither major-party nominee can get his backing, and that, at the moment, he’s looking at the Constitution Party as a least-bad option.

“The ends don’t justify the means. There is a case to be made for standing up for what you think is right, even if you’re in the minority or you are alone. There comes a time when you have to say, I can’t go any farther,” Beck said in an Oct. 12 phone interview. “Even if you lose, you actually win. Life is not about winning all the time. That’s hard to say because one of the candidates is only about winning.”

Beck, who campaigned with Ted Cruz’s presidential campaign and was an early champion of the tea party movement, said the election comes down to what he called a “moral, ethical choice” in one Facebook post that many interpreted as a Clinton endorsement. (It was not, he said in a follow-up post.) The item landed him in trouble with other conservatives, but he said he can’t worry about that given the allegations about Trump’s sexual assaults that sent his campaign reeling.

“I find it really insulting that a good portion of the society is dismissing this and saying, yeah, that’s just how guys are,” he said. “No, they’re not. Some guys are. And those are the guys I teach my daughters and my son not to be around or to be. … The idea is not to pull us down but to try to be better ourselves.”

If Republicans continue to tolerate Trump, Beck said, the party faces the risk of losing an entire voting bloc of recruits who are, like him, exasperated by Trump’s language and history. “We are going to lose the next generation. We’ve already lost the millennials,” he said. “We’ve lost that generation, 35 and under. The ones we are raising right now, if they see us behave in ways that are contrary to what we say we are teaching them, we will lose them too.”

Beck also questioned the hyper-hatred of Clinton, whom he has criticized for years on his broadcast shows and his website, theblaze.com. “There are people actually believing she is literally the devil. She’s not the devil. We survive,” he said of this election. “And we survive Donald Trump as well. How we survive—do we survive with our character and our principles?—that is still to be determined.”

Beck has legitimate questions if the whole Trump campaign has been a performance from a former reality TV host. “I don’t believe he believes in anything that he says. I believe that he is the most calculated politician I have ever seem—and that is saying something,” he said.

That doesn’t mean Trump lacks skill. “He has a gut sense of where he can tap into a strong passion. He has found this passion that he has tapped,” said Beck, who used similar enthusiasm to build the tea party. “I don’t think that he believes anything except he is great and he’s going to build the greatest fill-in-the-blank.”

That passion is unlikely to dissipate after Election Day, and Trump’s supporters will need to find another goal. “The Donald Trump mentality, which is the alt-right, this vicious, angry, make-them-pay, fall-in-line-or-you’ll-pay-for-it, that mentality is not going away,” Beck said. “He will play to a very small crowd of rabid fans.”

Beck speculated—as many have—that Trump’s next move is to create a media empire, from which he can continue pushing his ideas to jail Clinton, expel Muslims and dismantle press freedoms. That, Beck said, would be damaging. It will have the air of legitimacy and will only keep feeding self-reinforcing ideas that the Clinton Foundation is a scam, that Hillary Clinton covered up a scandal in Benghazi and that Bill Clinton is guilty of rape. These notions have been debunked by fact-checkers, but it does not matter.

“This alt-right situation will tear us apart. They will be as influential and as destructive, if not more so, as Black Lives Matter,” Beck said. “Except these guys, unfortunately, will be wearing white shirts and ties and they have learned how to mainstream some of their language. It’s very dangerous.” 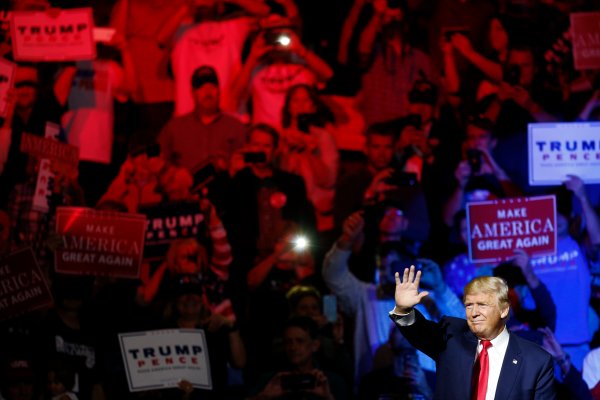