J.K. Rowling Says There Will Be 5 Fantastic Beasts Movies

During a pre-premiere fan event on Thursday, Harry Potter author J.K. Rowling confirmed an exciting tidbit for advance fans of the new Fantastic Beasts and Where to Find Them magical movie franchise: she’s planning on penning a total of five installments in the series.

At the event, which was livestreamed on Twitter, a panel of the actors (including Oscar winner Eddie Redmayne) and director David Yates fielded fan questions for about 45 minutes before Rowling made a surprise entrance on the stage, to the crowd’s wild cheers.

“David [Yates] has told you that we do talk about Dumbledore and Grindelwald,” Rowling first offered, referring to the iconic wizarding characters also present in her Harry Potter series. But then she revealed some seriously juicy information.

“We were doing some script sessions the other day, and I can tell you that we always knew it was going to be more than one movie; we knew that from the start. We said a trilogy is a kind of placeholder… I’ve now done the plotting properly, so we’re pretty sure it’s going to be five movies,” Rowling finally said, to an ecstatic audience response.

The actors, for their part, were shocked; this was the first they’d heard of the extended series. Redmayne raised his eyebrows, and the actresses looked around, bemused.

“Do you want me to kill you?” Rowling asked Dan Fogler, one of the other actors on the panel. Probably not, as these movies are guaranteed cinema gold. So buckle in, Beasts fans, for four whole more installments. 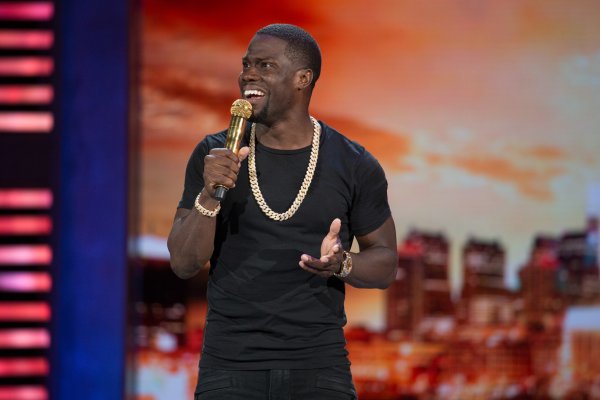 Kevin Hart's Live Concert Movie Makes an Entire City Laugh At Once
Next Up: Editor's Pick