Six years ago on The Simpsons, Milhouse Van Houten predicted that Bengt Holmström of MIT would win the Nobel Prize for Economics in 2016. On Monday, that prediction came true.

Holström and Oliver Hart of Harvard were announced as joint winners of the 2016 Nobel Prize in Economics for their pioneering work on contract theory and government versus private ownership. It’s a fairly bookish topic for the beloved Fox series, but it made sense in the context of Krusty the Clown being scammed into thinking he won the Nobel Peace Prize, and Milhouse proving himself to be a clairvoyant with uncanny knowledge of Nobel Prize winners. He was so eerily accurate that he even bested Lisa Simpson in the contest.

The prediction is spooky, particularly so in that this is far from the first time that The Simpsons have accurately predicted the future. They foresaw the tiger attack on Siegfried and Roy, they helped design the iPhone, and they predicted Donald Trump’s presidential candidacy. They even referenced golfer Arnold Palmer the same day as he died, which is strange as episodes are made months in advance. 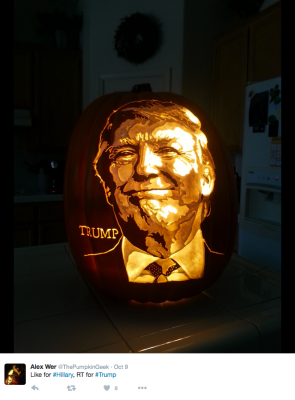 'Trumpkins' and Hillary Clinton Pumpkins Are Taking Over Halloween
Next Up: Editor's Pick