These 5 Facts Explain the (Dire) State of Press Freedom Globally

The Hungarian government shut down the country’s largest independent newspaper this past weekend. Media censorship exists all over the world, but each country adds its own twist to the process. Here are five countries where the state is making it particularly tough to be a political journalist.

1. Turkey
Media crackdowns are nothing new in Turkey, but the most recent wave of repression has reached a fever pitch following this summer’s failed coup attempt. Since the coup, the Turkish government has arrested more than 100 journalists; thousands more have lost their jobs and/or press credentials.

In President Recep Tayyip Erdogan’s mind, Turkey’s multifaceted fight against his many enemies—Gulenists, Kurds, ISIS—gives him broad scope to label any kind of critical journalism as terrorism. It’s even started to impact global politics at the highest levels. This past March, a livid Erdogan demanded that German comedian Jan Bohmermann be tried for insulting the Turkish leader under an arcane German law against insulting foreign dignitaries. Angela Merkel was forced to go along because she—and the future of the European Union—have so much riding on the refugee deal with Erdogan’s government. Charges against Bohmermann were finally dropped last week, but the reality remains: So long as Turkey plays such a crucial role in multiple geopolitical issues, its battles with the press will reach far beyond its own borders.

Read More: When Bob Dylan Took a Stand Against Censorship

2. China
Media has been heavily controlled in China since the founding of the People’s Republic. Beijing controls domestic media by forcing news agencies to report directly to local propaganda departments; the state censors foreign journalists indirectly by withholding visas and access. Chinese journalists who cross the state’s line on acceptable reporting are sometimes detained or even imprisoned—China led the world in imprisoned journalists last year with 49, according to the Committee to Protect Journalists (CPJ).

Things improved for a bit with the initial explosion of online media, but in recent years the Chinese authorities have mostly caught up to technology, and under President Xi Jinping, the media is now monitored more closely than at any time since the post-Tiananmen days of the early 1990s. Things may even get worse; as China tries to transition its economy away from manufacturing to services, its rate of growth is expected to slow. Economic performance is one of the Communist Party’s most important sources of legitimacy; if growth begins to falter badly, Beijing will feel the need to keep a tighter grip on the flow of information.

3. Russia
Russia is neither a full-fledged authoritarian regime nor a western-style democracy, and the result is a press environment that’s often as confusing as it is dangerous for reporters who anger the wrong well-connected person. Journalists are free enough to do challenging reporting, but not without fear of consequences. And there are plenty of targets: politicians, businessmen and military officials. Restricting independent media has been a constant theme of Putin’s presidency—one of the first things he did as president was to nationalize what was then the main independent TV broadcaster. More than 94 percent of Russians get their news from state-dominated television, a key source of Putin’s 82 percent approval rating amid sanctions, a war in Syria and a stumbling economy.

Then there is “data journalism.” For years, the Moscow-based Levada Center had been a beacon of independent polling and analysis. Just last month it was branded a foreign agent by the Justice Ministry, which restricts its ability to get foreign funding and puts its future in jeopardy. But it’s still safe for the time being; the Russian authorities read Levada’s polls too, after all. Sometimes even autocrats need independent journalists to get a true measure of their country’s pulse.

4. Egypt
For more than two decades, Egyptian President Hosni Mubarak kept the Egyptian press on a tight leash. But in the early 2000s, some Egyptian journalists had decided the time had come for more direct criticism of his regime. As press criticism mounted, it became increasingly clear that pressure was building in the state. Combined with social media’s rise, this helped launch the Arab Spring. Mubarak was ousted, and though the elected Muslim Brotherhood wanted to control the flow of information and ideas probably as tightly as Mubarak once had, the press once again fought back. In the years since the 2013 coup, President Abdel Fattah al-Sisi beat back press freedom with a vengeance. According to CPJ, Egypt was the second-worse jailer of journalists in the world in 2015 with 23. In this case, more press freedom didn’t bring more democracy.

5. Hungary
This weekend’s sudden closure of Nepszabadsag, the left-leaning publication that has long irked Prime Minister Viktor Orban and his right-wing Fidesz party, signals that media censorship is now a problem even within E.U. borders. The government claims that Nepszabadsag was done in by poor finances; unofficially, outside observers point to recent corruption stories published by the paper implicating senior officials in the Orban administration. This comes right on the heels of a referendum—which Nepszabadsag vociferously opposed—in which Orban asked Hungarian voters whether they agreed that Brussels should be allowed to force their country to welcome foreign refugees as part of a quota system.

Migrant quotas were rejected with 98 percent of the vote, though the referendum did not reach the 50 percent voter participation threshold needed to make it legally binding. Taken together, this is a worrying trend for both Hungary and the E.U.. Former Belgian Prime Minister and current member of European Parliament Guy Verhofstadt took to Twitter to exclaim “With its current policies, Hungary would not have been allowed to join the E.U. in 2004.” But the E.U. is much different place than it was back in 2004, including for journalists. Just how different remains to be seen. 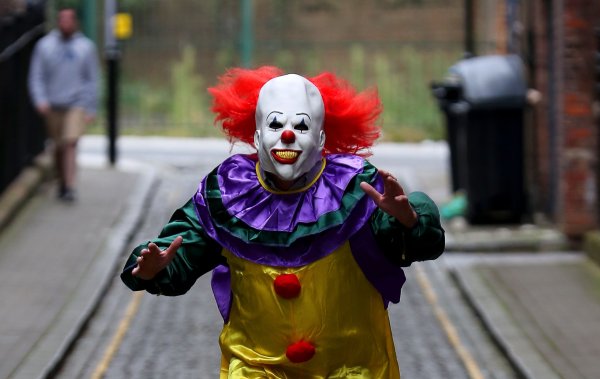 America's Creepy 'Killer Clown' Craze Spreads to the U.K.
Next Up: Editor's Pick