Inside Hillary Clinton Campaign's Response to the Donald Trump Video

Bailey McDaniel wipes off the side of the campaign bus of Republican presidential candidate Donald Trump before his campaign rally at the South Florida Fair Expo Center on October 13, 2016 in West Palm Beach, Florida.
Joe Raedle—Getty Images
By Sam Frizell

Trump has nosedived in national polls since the leak of a 2005 tape showing him boasting about groping women, and his divided party is creaking amid a wave of defections and internal debate like a ship in a storm.

For the last six days, the Clinton campaign has been more audience than provocateur. Clinton aides said they had no advance knowledge of the tapes’ release, and they have had little direct influence over the Republican Party’s flailing in recent days.

Rarely has a political campaign been handed such a potent gift.

Between huddles with Clinton in Westchester and discussions in Brooklyn headquarters, aides have quietly probed for new ways to take advantage of Trump’s apparent meltdown. The Clinton campaign, which took a backseat when the vulgar video of Trump was first published, has begun more actively expanding its options.

Clinton is intensifying her outreach to moderate Republicans and increasing focus on down-ballot races, partly an attempt to hurt Republican candidates who supported Trump until this weekend, aides said. And as Republican lawmakers dump Trump and struggle with infighting, they have re-examined the electoral map, eyeing states like Arizona, Georgia and even Utah.

When the video of Trump surfaced, Clinton’s inner circle was as surprised as everyone else.

Clinton herself was in a hotel in Westchester, New York, on a sunny Friday afternoon, surrounded by briefing books and preparing for her second debate against Trump when the Washington Post published the video.

Her senior aides, who had been prepping with the Democratic nominee, had taken a conference call to discuss a response to the White House hacking allegations against Russia. Around 4:30 p.m., deputy communications director Christina Reynolds interrupted the call: the Post had just published a video that showed Trump bragging about sexual assault.

Aides briefed their boss. Forty miles south, in Brooklyn, gasps sounded out at the campaign’s headquarters as they watched the video of Trump boasting about grabbing women “by the p-ssy” and making unwanted advances. “When you’re a star, they let you do it,” Trump was heard saying. “What is happening?” staff marveled.

For the next 48 hours, Clinton stayed quiet. Staff were glued to their computer and television screens, watching tweets roll in and Republicans from party chairman Reince Priebus to House Speaker Paul Ryan and Utah Sen. Mike Lee condemn their nominee. “I do not condone his remarks and cannot defend them,” said Indiana Gov. Mike Pence, Trump’s running mate. “We pray for his family.”

Trump had made vulgar and mean-spirited comments about women before, but this seemed different. As Republicans began defecting en masse, it became clear the video was an inflection point. Senior advisers devised a strategy for how to use it best.

At first, Clinton’s aides were hesitant to interrupt the flow of un-endorsements and wanted to let the Republican Party rip apart on its own. So the plan for Clinton was to hole up and wait for her debate against Trump to comment. In preparation over the next two days, the Democratic nominee honed a response to the video that would be viewed by tens of millions of people during her showdown against Trump.

The campaign’s television surrogates were told to respond to questions if asked, but not go overboard: the real response was coming on Sunday night. Meanwhile, campaign manager Robby Mook spoke with the campaign’s general counsel Marc Elias, who reassured him that despite angry Republican calls to have him step down, Republicans were stuck with Trump on the ticket.

At the Sunday debate, Clinton called Trump an aberration. “You know, with prior Republican nominees for president, I disagreed with them on politics, policies, principles, but I never questioned their fitness to serve,” she said. “Donald Trump is different.”

Anticipating that Trump’s statements would anger many moderate voters and college-educated Republicans, the Clinton campaign intensified a strategy to reach out beyond the Democratic Party base.

On Monday they released four new testimonial ads featuring Republicans explaining why they were voting for Clinton, instead of Trump, including a former Reagan official and the mother of a child with autism. Radio ads also went out in Florida and Ohio featuring converted Republicans.

Meanwhile Trump’s standing was deteriorating. The first national poll conducted after after the release of the Trump tape showed him losing to Clinton by double digits. Another showed Clinton drawing even with Evangelical voters. In deep-red Utah, a poll showed Clinton and Trump tied. Republican strategists were calling in the race for Clinton. “Trump was on a trajectory to lose, and if anything, that has been accelerated,” said Alex Conant, a former advisor to Sen. Marco Rubio.

Clinton’s aides were not counting the race over. Trump had insulted Muslims, minorities, the disabled and women but somehow withstood a barrage of public anger. “We’ve lived through too many incidents where things should have been extinction-level events for his campaign did not materialize that way,” a senior campaign official who spoke on the condition of anonymity.

Still, it was impossible not to feel some schadenfreude as lawmakers unendorsed Trump then re-endorsed him and he railed publicly against GOP stalwarts like House Ryan and Sen. John McCain. “A civil war is breaking out in the Republican Party,” said Jennifer Palmieri, the campaign’s communications director told reporters on Clinton’s plane on Sunday night after the debate. “I shouldn’t give them advice, but they have a lot of soul searching to do.”

Trump seemed to be unraveling in public view. He was threatening to jail Clinton and her lawyers and warning that the Islamic State would conquer the United States if Clinton won. Those public comments compounded his shaming of the former Miss Universe and the revelation that he lost nearly $1 billion in a single year in the 1990s. Trump’s advisers told the Wall Street Journal they were seeking to depress voter turnout by turning the race even more negative than it had been.

Clinton’s aides were now aiming less to discredit Trump—he was doing that on his own—and more to build an affirmative case for Clinton. She rolled out new middle class tax cuts on Tuesday in an effort to show she was staying policy-oriented. “When they go low, we go high,” Clinton said at the debate against Trump, a line she repeated in subsequent days. “I’ve done my best to stay above that. To stay focused on what really matters,” Clinton said on Wednesday night, even if few were paying attention.

The campaign insisted they were not shifting resources at the moment, but aides turned their focus in the days after the debate to new battlegrounds. Clinton’s running mate Sen. Tim Kaine was doing press in Utah and Arizona on Wednesday and Thursday. Polls suggested that taking back the Senate was increasingly likely, and that Democrats could pick up even more seats in the House.

“You’ll see she’s been clear that Donald Trump didn’t get to be the nominee by himself,” said another Clinton official. “He was aided and supported by Republicans, whether they are currently supporting him or not.”

Trump’s situation appeared more dire by the day, and Clinton didn’t hesitate to needle him. On Wednesday the Clinton campaign posted a video on the nominee’s Facebook account called “The Final Meltdown,” with images of Trump’s post-debate tweet saying “the shackles have been taken off” and his campaign appearances, to the tune of the rock song “Final Countdown.”

More women came forward on Wednesday night saying Trump had sexually assaulted them. Trump denied the claims and threatened to sue the outlets that had published them. Meanwhile, Clinton herself, pledged to float above the fray.

“I believe you deserve something to vote for, not just something to vote against,” she said at her rally on Wednesday night in Las Vegas as more damning stories about Trump appeared. “That’s all they have left. Pure negativity.” 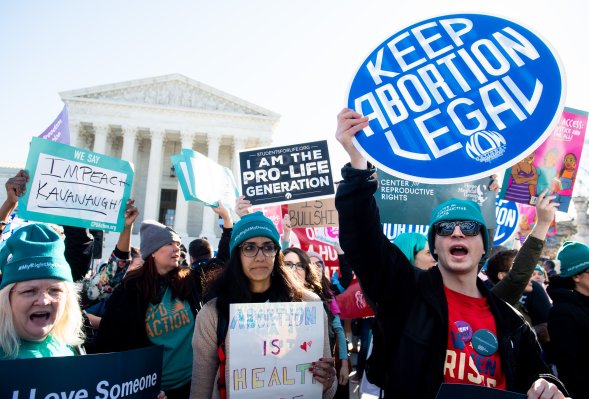