The creepy clown craze that has been taking the U.S. by storm since it began in South Carolina in late August has spread across the pond to the U.K.

Greater London’s Metropolitan police force has reported responding to a growing number of clown-related incidents and warned that those who dress up as ‘killer clowns’ and intimidate others may be accused of committing a criminal offense.

The force’s statement follows a series of alarming reports including a man being startled and chased by a stranger wearing a clown mask and carrying a hockey stick on Oct. 6, and a woman who was chased by a knife-holding man in a clown mask on Oct. 10.

Just days after both these incidents took place, an 18-year-old from South Wales was fined £90 ($110) for committing a public order offense after he dressed up in a clown’s outfit and “intimidated” children outside his former school. The offense will go on his criminal record. “There is a time and place to have a laugh and a joke – but not outside a school,” a parent told the BBC.

A 13-year-old was also arrested by West Midlands police for allegedly assaulting a 14-year-old while wearing a clown mask, The Guardian reports.

The frenzy is likely to get worse in the buildup to Halloween, which has become as big a holiday in the U.K. as it is in the U.S.. “Whilst we do not want to stop people from enjoying themselves it is important that while having fun they remember to act in a responsible manner and understand that they could be prosecuted if a criminal offence is committed,” Metropolitan Police Commander Julian Bennett said, in a statement.

The creepy craze was born in Greenville County, South Carolina, over summer, after unsubstantiated reports surfaced that clowns were spotted trying to lure children into the woods. Scary clown sightings were then reported in more than two dozen states from Alabama to Wisconsinbefore becoming an international phenomenon. 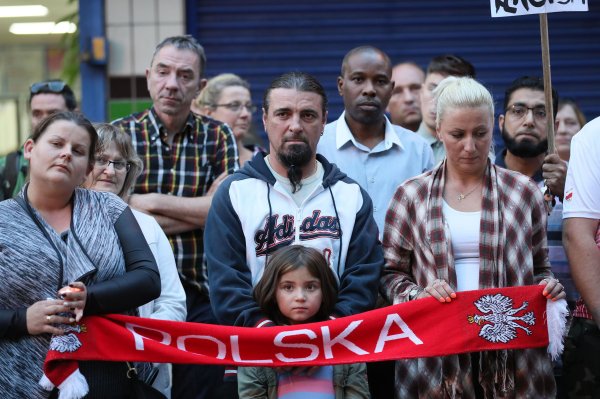 U.K. Sees Surge in Hate Crimes After Brexit Vote
Next Up: Editor's Pick