The Accountant Pays Small Dividends on Its Star

If The Accountant had been made in the 1970s, preferably by Roger Corman, the studio marketing department wouldn’t have had to think twice about the tagline—“He’ll whip your assets!”—and the movie would be a lot more fun too. As it is, the premise of The Accountant is so preposterous that it almost qualifies as fun: Ben Affleck plays Christian Wolff, a socially awkward math savant who runs a small-town strip-mall accounting business by day but retreats, in his spare time, to a vintage Airstream trailer kitted out with state-of-the-art weapons, drawers full of cash in every currency and a museum–worthy artwork or two. (There’s a Jackson Pollock mounted on the ceiling above his bed, so he can gaze upon it while thinking his orderly accountant’s thoughts.)

Christian’s day job sure looks boring, but his real line of work is cooking the books for big-time criminal outfits, which means he needs to be able to disappear at a moment’s notice—hence the hipster bachelor–pad trailer—and, every once in a while, kill somebody. Luckily, he’s also an ace marksman and a fearsome martial–arts practitioner, but only as the result of bad parenting. As a kid, Christian had a chance to attend a progressive neurological institute for children with special issues, like autism. But the tough, terrible love doled out by his thuggish, career–soldier dad—“If loud noises and bright lights bother him, he needs more, not less”—set this loner genius on the path toward crunching numbers for the wrong side of the law. It also helped him hone the skills necessary to break heads.

The setup offers all kinds of dazzling possibilities, but director Gavin O’Connor (Warrior, Jane Got a Gun) and writer Bill Dubuque (The Judge) mostly go for the organized–sock-drawer kind. Anna Kendrick appears as the love interest masquerading as an allegedly interesting character with a job—she plays Dana, an accounting clerk who discovers a glitch in the books of her employer, a robotics company run by a shifty–looking John Lithgow. Christian is brought in to locate the source of the discrepancy. Meanwhile, a Treasury Department agent on the verge of retirement (J.K. Simmons) lurches toward that one last big case, and Christian just might lead him to it.

But the story’s wowza surprise revelations—most of them tied up haphazardly near the end, in the now obligatory expositional wrap-up—hit with about as much zip as an annotated spreadsheet. That’s a shame: The Accountant would be more entertaining if it just acknowledged its own nerdy outlandishness. Still, it’s something to watch Affleck play a man who has trouble expressing his feelings and struggles to read those of others. In addition to that Airstream, Christian has a featureless apartment, where we see him retreat to cook and then consume a humble dinner of exactly three fried eggs, three pancakes and three strips of bacon. It’s ritualistic details like these—and not watching Christian leap and run and prove his prowess with automatic weapons—that make The Accountant watchable. How do you show what a man is feeling when he has a face unaccustomed to showing feelings? Affleck somehow pulls it off, mostly with nothing more extravagant than a stray glance or a shadowy muscle twitch.

Konstantin Stanislavsky counseled that actors should play objectives rather than outright feelings, anyway. What, then, does Christian want? In the movie’s finest moment—it’s Affleck’s finest moment too—he listens as Kendrick’s Dana explains how she really wanted to be an artist, but her father urged her toward a more practical career. She belittles her dad’s views of art, explaining that his taste runs mostly to poker–playing dogs. Christian, unable to flirt, instead plays the contrarian. He likes paintings of poker–playing dogs, he says, “because dogs would never bet on things. It’s incongruous.” And he winks at her without winking. Compared with that, busting heads is just kid stuff. 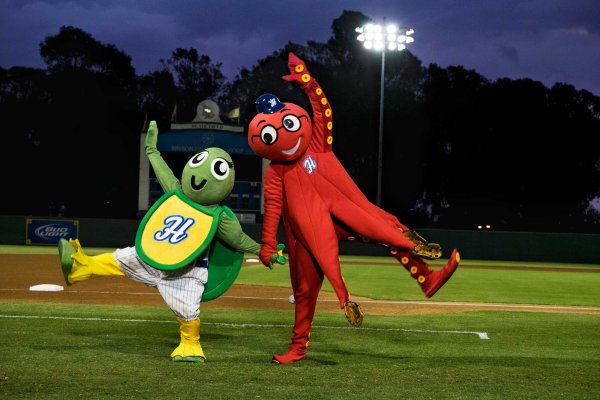 Under the Giant Heads of Mascots Live Absurd Humans Just Like Us
Next Up: Editor's Pick