Thousands of People Have Been 'Displaced by Fighting' in Eastern Burma

In this photo taken on September 21, 2016, residents who fled from conflict areas in Karen state take refuge at an evacuation center in a monastery in Myaing Gyi Ngu. At least eight people have been killed and thousands displaced by clashes in southeast Myanmar between government troops and an ethnic rebel splinter group belonging to the Democratic Karen Buddhist Army.
AFP/Getty Images
By TIME Staff

Fighting over the construction of a Chinese- and Thai-backed dam has displaced up to 10,000 people in east Burma’s Karen state (also called Kayin state), according to reports.

According to Thai newspaper the Nation, a Burmese government-affiliated border militia and an ethnic Karen insurgency group, the Democratic Karen Buddhist Army, are battling for control of the area where the Hat Gyi Dam is under construction.

The director of the Karen Cultural and Development Centre said the situation of around 1,000 refugees — mostly women and children — trapped by the fighting in two villages on the Thai border was becoming particularly desperate.

“They are unable to sustain themselves and have no access to fundamental services,” Surapong Kongchantuk told the Nation.

One unnamed Karen volunteer said, “The refugees have nowhere to go. They cannot go forward and they cannot return … There is still no humanitarian aid from any official agency or international organization. These people are in a very desperate situation.”

The Hat Gyi Dam is being built by a Thai, Chinese and Burmese consortium on the Salween River. Surapong told the Nation that its construction will mean that “large areas will be flooded and large numbers of people displaced forever.” 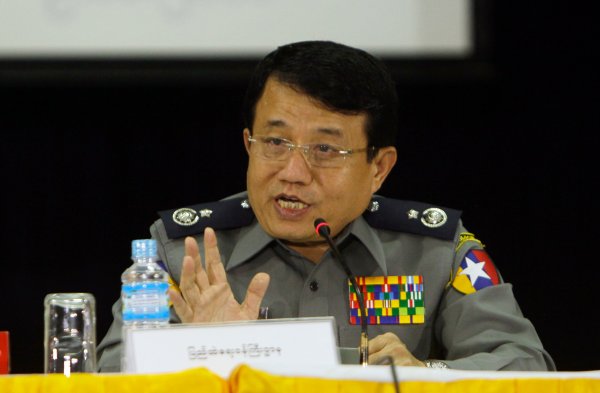 9 Police Dead After Border Post Attacks in Burma
Next Up: Editor's Pick