In this Oct. 5, 2016, photo, Hillary Clinton campaign chairman John Podesta speaks to members of the media outside Clinton's home in Washington.
Andrew Harnik—AP
By Elizabeth Dias

Hillary Clinton advisers say that the Trump campaign’s charge that it is anti-Catholic is a “faux controversy” stirred up over two email exchanges revealed in the WikiLeaks hack.

In an email from 2011, a senior fellow at the Center for American Progress wrote to Clinton’s now campaign chairman John Podesta and her now campaign spokeswoman Jennifer Palmieri, who are both Catholic, about many “powerful elements of the conservative movement” that are “all Catholic,” saying they were a “bastardization of the faith” and that “they must be attracted to the systematic thought and severely backwards gender relations.”

Palmieri responded: “I imagine they think it is the most socially acceptable politically conservative religion. Their rich friends wouldn’t understand if they became evangelicals.” Podesta did not respond.

Trump campaign staff and supporters call this evidence of anti-Catholic Democratic sentiment. In a national conference call on Wednesday afternoon, campaign manager Kellyanne Conway, who is Catholic, called on Clinton to apologize for “hostility to religious liberty and to the beliefs we hold as Catholics.” Former House Speaker Newt Gingrich, who converted to Catholicism in 2009, added that “now we know what Hillary meant by deplorables. It was people of faith.”

Trump’s evangelical supporters prepared to release a statement calling for Clinton to “immediately apologize for the Christophobic behavior of her associates.”

Clinton spokesperson Brian Fallon responded on Twitter: “Latest faux controversy out of @Wikileaks hack: Accusing Jen Palmieri, who is Catholic, of being anti-Catholic.”

In a second email from 2012, a liberal activist wrote to Podesta, arguing that Catholics need to “demand the end of a middle ages dictatorship” and demand “respect for gender equality.”

Podesta wrote back to note that while groups like Catholics in Alliance for the Common Good and Catholics United had been created to push for a more progressive approach to the faith, change would “have to be bottom up.”

“By dribbling these out every day Wikileaks is proving they are nothing but a propaganda arm of the Kremlin with a political agenda doing Putin’s dirty work to help elect Donald Trump,” he tells TIME in an email. “The FBI is now investigating this crime, the unanswered questions are why Donald Trump strangely won’t condemn it and whether any of his associates are involved.”

The two campaigns are fighting for white Catholic voters in places like Ohio, where they are a swing-voting group. According to a July survey of registered voters from the Pew Research Center, Clinton and Trump are closely tied at roughly half of white Catholics, though more than three-fourths of Hispanic Catholics back Clinton.

— With reporting by Tessa Berenson and Sam Frizell 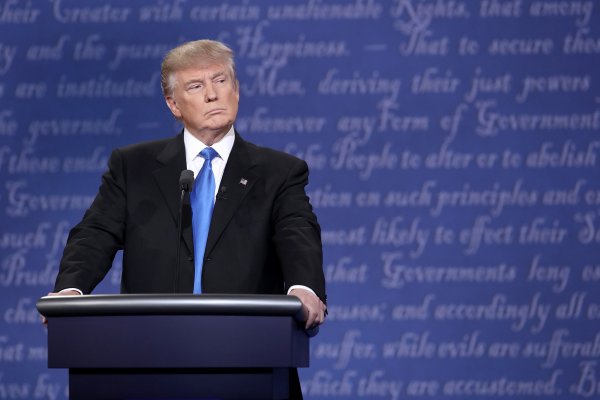 Which Republicans Have Stopped Supporting Donald Trump?
Next Up: Editor's Pick