Yemenis attend the funeral of members of a family killed in a reported airstrike by Saudi-led coalition air-planes in Bajil, Yemen, on Oct. 8, 2016.
AFP/Getty Images
By Jared Malsin/Istanbul

A double airstrike incinerated a packed funeral hall in Yemen’s capital on Oct. 8, killing about 140 people. It was a scene of fire and blood that was widely blamed on a military coalition led by Saudi Arabia that has intervened in Yemen since March 2015.

The attack underscored the human cost of the Saudi-led operation in Yemen, where an estimated 10,000 people have been killed, according to the United Nations. It also illustrated one of the more uncomfortable aspects of American foreign policy in the Middle East, where the U.S. supports the Saudi-led military campaign while condemning similar mass attacks on civilians elsewhere in the region.

Washington responded to the attack by announcing a review of aid to its longtime ally Saudi Arabia, whose government purchased more than $20 billion in arms from the U.S. in 2015 alone. A White House statement on the attack says the administration has “serious concerns about the conflict in Yemen and how it has been waged.” The statement, by U.S. National Security Council Spokesman Ned Price, added that “U.S. security cooperation with Saudi Arabia is not a blank check.”

But Saturday’s attack was not the first one to call into question the rationale for U.S. support for the Saudi-led operation. The Saudi coalition has a long record of attacking civilian targets in Yemen, including schools, hospitals, factories and marketplaces. In May 2015, the coalition dropped leaflets declaring the entire province of Saada a military target. Data compiled by independent researchers and published by the Guardian in September showed that one in three Saudi-led airstrikes hit civilian targets.

“Unfortunately the reality is United States support has not actually decreased the human cost at all,” says Farea Muslimi, a Yemeni analyst with the Carnegie Middle East Center. “It has unfortunately contributed to it, given the Saudis a blank check over Yemen in this war.”

The timing of Saturday’s attack seemed to illustrate U.S. inconsistency in its approach toward alleged war crimes. The same day as the Saudi-led strikes on the funeral in Sana’a, the United Nations Security Council met in in New York, where U.S. ambassador David Pressman condemned the Russian and Syrian regime offensive in the besieged city of Aleppo, calling the bombing there “terrifying” and an exercise of “brutal force.” That juxtaposition—criticism for Russia and Syria, relative silence for Saudi Arabia—offered fodder for critics who say American support for the Saudis undermines U.S. credibility elsewhere in the region.

“You can’t be trying to negotiate a resolution at the U.N. Security Council on Saturday to condemn Russia and sanction Russia for airstrikes in Syria when your ally and partner, Saudi, is doing the exact same thing,” says Sarah Leah Whitson, director of the Middle East and North Africa Division at Human Rights watch.

Like the conflict in Syria, the current war in Yemen has its roots in the Arab Spring of 2011. After months of protests, Yemen’s autocratic president Ali Abdullah Saleh agreed to hand power to his deputy, Abed Rabu Mansour Hadi, in February 2012. But by 2014, the government failed to build a consensus around the transition process. Riding a wave of popular discontent, Houthi rebels entered the capital and in 2015 forced Hadi into exile. The Houthis—drawn from the Zaydi-Shiite population primarily in northern Yemen—are now allied with former President Saleh and his supporters, who control some units of the military.

Saudi Arabia, the United Arab Emirates, and other mainly Sunni Arab states intervened in Yemen in March 2015 in an attempt to roll back the Houthis, who they regard as a proxy for Saudi Arabia’s chief rival in the region: the Shiite power Iran. The intervention also came as the U.S. had entered the final stages of negotiations toward a nuclear deal with Iran—a deal Saudi Arabia was vociferously opposed. In part to assuage those Saudi concerns, the U.S. lent its support for the war in Yemen.

From the beginning, the operation was marred by attacks on civilian targets, including at least four hospitals supported by the renowned international aid group Medecins Sans Frontieres (MSF). In August, the aerial bombing of a hospital in Hajja province killed 19 people, forcing MSF to evacuate its staff from northern Yemen.

The Obama administration has given the Saudi coalition intelligence and ammunition, but U.S. officials have often sounded less than enthusiastic in their defense of the operation. The U.S. has also places some limits on its operational support. In May the White House quietly halted the transfer of cluster munitions to Saudi Arabia after human rights groups documented their use in attacks on civilians. “It’s impossible to defend this or justify this or explain this in a way that doesn’t undermine everything else you’re trying to pursue in the region,” says Whitson. “They know it.”

The recent fighting in has also created a power vacuum that offered opportunities for Yemen’s al-Qaeda franchise to grow in strength. Months after the launch of the Saudi operation, al-Qaeda’s forces had gained ground, but in 2016 the coalition announced that it began actively fighting al-Qaeda, declaring that it retook key areas from the group. ISIS has also attempted to capitalize on the chaos, with limited success.

The funeral that came under attack on Saturday was for Sheikh Ali al-Rawishan, the father of the interior minister in the Houthi government, and was packed prominent Yemeni officials and elites. The location of the funeral was publicized in advance, suggesting that the attack could have been deliberate. The victims included Sana’a’s mayor, Abdel-Qader Helal, a popular figure unaffiliated with either side in the war. The attack was a so-called “double tap” airstrike: an initial strike, followed by a second bombing that often comes after ambulances arrive. “There is no doubt in our minds that the Saudis knew they were striking a funeral hall,” says Whitson.

Muslimi, the analyst with Carnegie, puts it simply: “It’s an unbelievable war crime.” 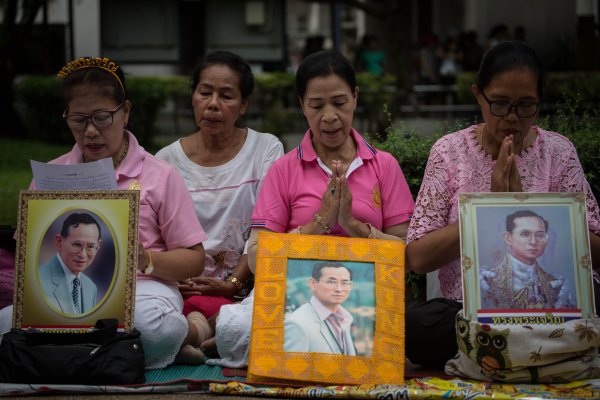 Thailand's King Remains in an 'Unstable' Condition
Next Up: Editor's Pick