Buttons for voters who support LGBTQ rights, including one with a picture of the late Matthew Shepard, likely from the 1998 election.
Marvin Joseph—The Washington Post via Getty Images
Ideas
By Judy Shepard and Chad Griffin
Judy Shepard is the president and founder of the Matthew Shepard Foundation, which has joined the new Eliminate Hate Campaign.
Griffin is the president of the Human Rights Campaign.

Matthew Shepard would have turned 40 this year.

Today, eighteen years after his murder, it’s hard not to imagine the promise and possibilities that his life held. It’s difficult not to think about the career he might have led, the love he might have found and the family he might have begun. The memories of Matthew—and countless other LGBTQ people we have lost to hate—stay with us. And they must. They are why we continue to fight.

While there’s no question that we have made progress in recent years, from marriage equality to the repeal of “Don’t Ask, Don’t Tell” to the passage of the Matthew Shepard and James Byrd, Jr. Hate Crimes Prevention Act, we still have a long way to go in our struggle for equality.

In the vast majority of states, LGBTQ people remain at risk of being fired, evicted or denied services because of who they are. Youth face staggeringly disproportionate rates of bullying, abuse, homelessness, depression and suicide. An epidemic of hate violence, often aimed at transgender women of color, still plagues our country. And in June, the same vile anti-gay hate that killed Matthew stole 49 lives at Pulse nightclub in Orlando.

Make no mistake. We are still fighting the hate that killed Matthew.

The question before us remains, what will we do about it? Are we willing to confront hate wherever it rears its ugly head—whether it’s in our schools, homes or pews? And how will we respond when politicians target LGBTQ people for political gain? Will we do what it takes to hold them accountable and ensure there are consequences?

Right now, we find ourselves at a crucial turning point. A growing majority of Americans believe in LGBTQ equality—and not just marriage equality but full, federal equality. We have a pair of candidates in Hillary Clinton and Tim Kaine who aren’t just trying to say the right words, but are pushing the envelope and ready to fight alongside us to end hate violence, pass the Equality Act, stop the stigma and spread of HIV and outlaw the abusive practice of “conversion therapy” on minors. And there are now nearly 10 million LGBTQ voters, comprising major voting blocs in key battleground states, who can determine the outcome of this election and change the course of history.

And that’s exactly what we are going to have to do to break the cycle of politicians peddling hate and ignorance to stir up votes. For decades, we’ve seen feckless candidates attack LGBTQ people for political gain. While such vile tactics are fortunately losing their potency among the broader electorate, in some corners these attacks remain a rallying cry. This election year, we’ve heard troubling and hateful rhetoric from Donald Trump, Mike Pence, Pat McCrory, Phil Bryant, Ted Cruz and others looking to the fringe in a desperate search for votes and support. Mike Pence, who is currently being discussed as a possible “solution” to replace Donald Trump atop the GOP ticket is a man whose career has been defined by these acts, including voting against hate crimes legislation he called “part of a radical social agenda.”

We must make sure they don’t succeed.

Across America, there are countless young people who will lie awake tonight filled with terror at the prospect of going to school tomorrow. They might feel scared in their place of worship, or even their own homes. This fear and stigmatization is only amplified every time they turn on the TV and see politicians like Trump, Pence and McCrory attacking people like them.

But at the ballot box, we can send a powerful message of support to those suffering at the hands of bigots and bullies. If we turn out at the polls and put pro-equality officials in office, we can put an end to the era of politicians profiting from attacks on LGBTQ people.

We literally have the power to decide this election. In Florida, there are more than 550,000 LGBTQ adults in a state that was decided by 70,000 votes in 2012. In North Carolina, where less than 130,000 votes separated Mitt Romney and President Obama, a quarter million LGBTQ adults can help turn the page on discrimination this Election Day.

But this is about far more than an election. It’s about ending, once and for all, the use of hate against LGBTQ people as a political crutch. And in so doing, we will honor those we’ve lost and build a safer and more equal world for the next generation. 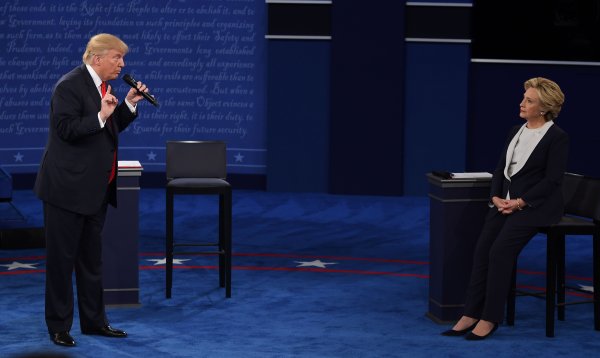 Meet the Men Who Taught Donald Trump How to Bully
Next Up: Editor's Pick