Since the leak of an 11-year-old tape of Donald Trump’s vulgar comments about women, nearly 20% of the 331 current Republican governors, Senators and House members have renounced their party’s nominee, according to a TIME analysis of each official’s statements. Among women lawmakers, that figure is nearly double.

The tape, which the Washington Post first released on Oct. 7, sent Republicans scrambling to distance themselves from their nominee for President. Virtually every prominent Republican and candidate issued statements condemning Trump’s remarks in the strongest terms they could muster. But while some went as far as to call on Trump to drop out of the race, or at least rescinded their personal support, many others said they accepted Trump’s apology and would continue to support him, albeit with a certain amount of nose-holding.

The following chart shows where each of those individuals stands on Trump’s candidacy. Select the options below “Filter by” to see how support changes among different groups of Republican officeholders.

Curiously, there is no significant distinction between members who are up for re-election in November and those who are not. While the defectors come from across the country, several observers have noted that many Utah lawmakers were particularly quick to jump ship. (The number of female lawmakers who renounced Trump was originally 40 percent, but sunk to 35 percent when Senators Deb Fischer and Shelley Moore Capito reversed course and said they will support the entire Republican ticket.)

Of course, there are many shades of support for Trump — the site FiveThirtyEight identified seven discrete flavors back in July. In most cases, an official’s stance was clear, but a few were ambiguous. As a rule, we considered anyone who initially supported Trump and didn’t explicitly renounce that support as still backing the nominee, even if he or she censured the nominee’s comments in the harshest terms possible. We also did not draw a distinction between those lawmakers who have endorsed Trump and those who have threaded the needle by saying they will vote for him without officially endorsing.

We will continue to update this list as members defect (or undefect). Please send tips or updates to chris.wilson@time.com and david.johnson@time.com.

Sources: In addition to many local newspapers and television stations, we gratefully relied on the thorough reporting of the Washington Examiner, Roll Call and Politico in compiling this list. 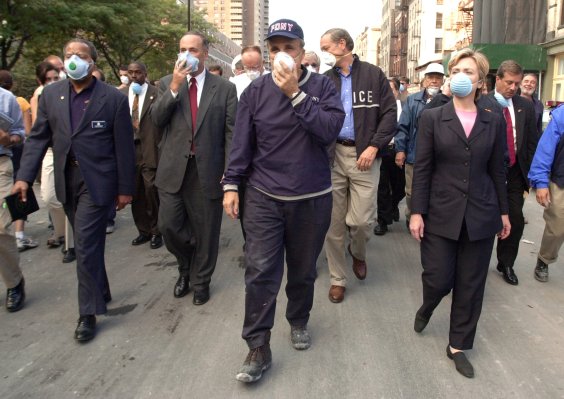 Here’s the Photo That Contradicts Rudy Giuliani’s Criticism of Hillary Clinton
Next Up: Editor's Pick