An animatronic fortune-telling Trump machine in the style of Zoltar has appeared on the streets of New York City Tuesday.

Created by artists who wish to remain anonymous, this “All Seeing Trump” is a movable art installation which presents a satirical robotic version in the style of the Tom Hanks movie “Big” of the Republican nominee. Voiced by era-defining comedian Anthony Atamanuik, the man inside the glass has glowing red eyes, a decidedly anti-immigration stance, and a grim vision of the future. At the push of the red button, he’ll launch into nightmarishly extreme predictions.

Some sayings are comedic: “Look into my crystal ball and see America’s future. I see a huge investment into a modern high-speed rail system…and we’re going to use it to deport eleven million illegal Mexicans.” Others are fact-based on-brand tales: “I could stand in the middle of 5th Avenue and shoot somebody and I wouldn’t lose voters.” It even spits out old-timey style tickets with takeaways advising passerby to “build a fallout shelter,” and has appeared throughout the city at Trump Tower, a Queens mosque and Acapulco Restaurant & Deli, which serves Mexican and American food.

UPDATE: the anonymous creators behind the machine have confirmed that the blistering comedian Anthony Atamanuik voices the machine, telling TIME “there is no better impersonator I’m aware of, and it was vitally important to us to get every detail right.” The stunt has also appeared at Planned Parenthood, the New York Times, Fox News, all locations the creators told TIME are “contextually relevant to Trump’s policies and the “misfortunes” the machine doles out.” 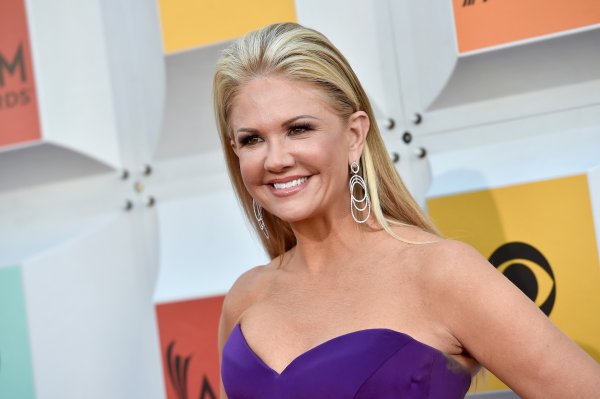 'There Is No Room for Objectification of Women': Nancy O'Dell Addresses Trump Tape
Next Up: Editor's Pick