Thailand’s King Bhumibol Adulyadej remains in an “unstable” condition in Bangkok’s Siriraj Hospital, the palace announced Wednesday, with a team of doctors closely monitoring his treatment.

Quoting a statement from the King’s medical team provided by the palace, Thai online newspaper Prachachat said that his “blood pressure was getting low again, his pulse faster, with increasing acid level in his blood” and that his “blood test revealed that there is some infection and abnormal functioning of his liver.”

The King was put on a ventilator and given CRRT dialysis treatment, used to treat critically ill patients with acute kidney damage, the statement said.

The announcement is the first update on the King’s condition since Sunday, when the palace announced Bhumibol was in an “unstable condition” after receiving hemodialysis treatment.

On Wednesday evening, hundreds of well-wishers gathered outside Siriraj Hospital to show their support for the King. A steady ebb and flow of people thronged into the compound. Many sat or knelt, lining the walkway to the hospital doors in neat rows, holding images of the King. A group of women in pink shirts recited a song believed to bring health. Others lit incense as they prayed in front of a statue of Mahidol Adulyadej, Bhumibol’s late father.

“We come here to pray and meditate, because we think, with a lot of people here together, it will send out good vibrations to the King,” says Kay Santi, 46, owner of a production company.

Earlier on Wednesday, junta leader Prayuth Chan-ocha was recalled to Bangkok from neighboring Chonburi province to prepare for a meeting with Crown Prince Vajiralongkorn, according to government spokesperson Lieut. General Sansern Kaewkamnerd.

“The Prime Minister did not undertake his official duties in Chonburi province today in order to prepare for an audience with His Royal Highness the Crown Prince for a routine presentation on the government’s work in progress,” Sansern said in a statement.

Unconfirmed reports suggested senior members of the royal family had gathered at the hospital, including the Crown Prince and Princess Sirindhorn.

The atmosphere outside Siriraj Hospital was somber as light raindrops fell from the sky. Chants of “Long Live the King!” filled the air after the Thai national anthem crackled over a speaker system.

Nitilak Leander, a 45-year-old naval commander, said he came to the hospital after hearing reports in social media regarding the King’s health. “Every day I will pray and meditate, praying his condition will improve,” he says. “Today there are so many people gathered here at the hospital.”

The 88-year-old ailing King has spent most of the year in hospital, and his recent turn has sparked widespread concern in the kingdom.

But those keeping vigil 16 floors below the King’s hospital bed remained hopeful.

“We believe that the power when we pray together, just like Christianity or other religions, can make the King better,” says 42-year-old English teacher Donnapha Kladbupha. 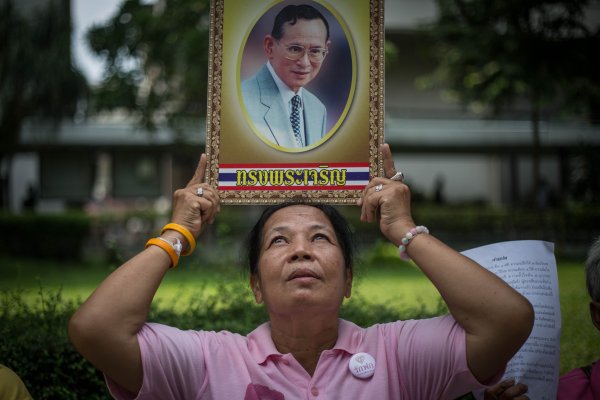 Thais Pray for Recovery of Ailing King Bhumibol Adulyadej
Next Up: Editor's Pick