SAN FRANCISCO — For eight innings, the outcome felt inevitable. After all, these were the even-year Giants and the cursed Cubs, in an elimination game. Even Cubs manager Joe Maddon couldn’t fight it. Asked after the game what he was thinking heading into the ninth, down 5–2, Maddon—backwards hat still dripping celebratory Prosecco—said, “Johnny Cueto at Wrigley Field.”

But even inevitability is no match for the Giants’ shaky bullpen. This San Francisco team may have conjured the magic of previous even-year squads, first in the wild-card game, again in Game 3’s 13-inning victory, and for large stretches last night, no more so than when Connor Gillaspie, this year’s honorary Cody Ross, improbably garnered four more hits. But this was not the customary even-year ‘pen.

Bruce Bochy kept in Matt Moore, who gave up only two hits, through the seventh, then the eighth. Giants fans likely wouldn’t have blamed the manager for bringing Moore back in for the ninth, despite 120 pitches, just as they probably would have been fine seeing Madison Bumgarner run out for the ninth, even on no rest. Anyone but a Giants closer, really.

Bochy later said he had a plan, hoping to go matchups. He summoned rookie Derek Law first to face Kris Bryant, who singled. A procession of relievers followed: Javier Lopez, Sergio Romo (the nominal closer), Will Smith and finally Hunter Strickland. It didn’t matter. The Cubs rallied for the 6–5 win on Tuesday behind ground balls, errors and fluky hits, capped off by the go-ahead RBI from series hero Javier Baez. Next thing you knew, there was Aroldis Chapman on the mound with two outs in the bottom of the ninth, blowing a 101 MPH fastball past Brandon Belt, handing the Giants their first postseason series loss since 2003.

In the moments after, once the Cubs players rushed Chapman, they posed for photos on the mound and began chanting “We Don’t Quit.” It’s one of the team’s many mottos. Just play 27 outs is another favorite of Maddon’s. “Just Don’t Choke” would have worked too. After winning 103 games, and going up 2–0 on the Giants, a series loss felt far too close for comfort, especially with the Giants wearing the immortality cloak of that elimination game streak. You could see the relief on the face of Theo Epstein in the Cubs clubhouse afterward—though perhaps it was just the champagne—as he spoke about it, saying, “It’s hard to finish off a team in the postseason, especially one with that character.”

As for Bochy, he was left to invoke larger forces. “With the way the ball bounced the last inning, I hate to use the word destiny, but they have had a great year and that’s quite a comeback they mounted there.”

Indeed, the Giants could have easily been the ones celebrating on this night. They came close to winning Game 1. And last night began full of omens, starting with the man who brought a goat outside AT&T Park prior to the game (this being San Francisco, the man worked for a “San Francisco-based goat landscaping business”). Then the Giants got to Cubs starter John Lackey early, and by the second inning he was bouncing an awful lot of pitches, perhaps inspired by Warriors forward Draymond Green, whose ceremonial first pitch fell to earth a good five feet before he’d have liked.

This began something of a theme: Brandon Crawford uncharacteristically one-hopped a routine throw to first, allowing Baez to advance to third. Baez in turn caught a one-hop throw from Cubs catcher David Ross and applied a yoga-pose tag to Denard Span at second—reaching around in front of Span and, in one motion, catching the ball and tagging him. (Sidenote: anyone who says watching baseball is boring should watch Baez play defense.)

It got more improbable, and weird: Pence inexplicably not scoring on a near-home run by Crawford. Dexter Fowler getting thrown out by Pence while advancing to second on a Cubs single. Matt Moore driving in a run, bringing the number of RBI by pitchers in the series to seven. And Ross, the ancient catcher, accounting for both Cubs RBI prior to the ninth inning.

That’s the postseason, though. Heroes are where you find them. Luck and fate are interchangeable. To the hundreds of Cubs fans on hand at AT&T Park on Thursday night, how it happened is irrelevant. Their team is on to the NLCS for the second straight year, to face the winner of the Dodgers-Nationals series, led by a brash young core and a deep, dominant pitching staff.

So there the fans were last night, cheering and chanting in a mass above the Cubs dugout, refusing to go home. Finally, at 10:07 p.m. PT, exactly an hour after Chapman’s last pitch, the AT&T stadium staff cut the lights on the Cubs fan, leaving them to head to the exits, smiling and hugging, their celebration equal parts glee and relief. 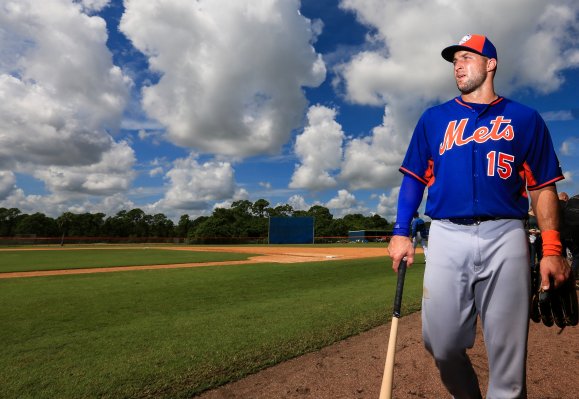