The lights went on this week. As I watched the footage of Donald and Billy on the bus, I was simultaneously sickened and thrilled. I was sickened for all the same reasons our whole country was sickened. It didn’t help to see Justin Trudeau parading around up North with all of his ethics and fantastic sweaters.

But I was thrilled because it was finally out in public.

“Those aren’t my friends,” the men I love have said to me.

“O.K.,” I toss back, “I know maybe you don’t go as far as Billy and Donald, with the planned p-ssy grabbing and the Tic Tacs to prepare for the mouth rape. But tell me this: when men are alone together, they assess and talk about and point to women and girls they don’t know. You’ve seen that, right?”

Oh — that? Of course! they all answer. I mean — it’s classic masculinity. Two or more men get together and play an alpha game in which they join their gaze upon any ol’ chick, and let their inside-brain thoughts come out. They call her a that and they talk about whether she wants it, whether they could get that, whether she might be jailbait — so one day less than 18, or one day older than 18 and therefore totally ripe, what kind of a slut she might be (someone who does it for free), or what kind of a whore she might be (someone who does it for money).

Oh, antics! I prefer the term toxic, rather than classic, masculinity. Toxic masculinity is what gives name to the question of why most violence on this planet is done by men to men, why nearly all of the sexual violence is done by men, why the word football correlates more strongly with Sundays for most Americans than the word God.

When people say, Boys will be boys and this is just the way it is, I know that’s not true. This. Can. Change. I remember how there was absolutely a moment in American history where the civil rights movement powered a hard left turn, where white people talking about black people in polite company, where using the once tossed around N word in front of another white person became cause for lawsuit, firing, social suicide, exclusion.

But not so with men talking about women.

“Do you ever,” I ask those men who say they don’t participate, “call men out for doing this when you hear it happening, the way you would with racism?”

The divided feminine is real. Madonna and whore don’t even begin to get to the heart of it. Men as singular subject, women as an object divided in two.

Imagine, for my metaphor, if you will, a man ripping an imaginary woman in two.

The other half is held down low. The bad women, the drunken women, the passed-out women, the strippers or the sluts. They belong to no one, they are not property, so they become the ones men get to talk about with other men.

We internalize this divide. Women call other women these names because women are unknowingly following a map about access, a how-to manual once offered as a way to live but more recently exposed as a map to gaining access to power. Patriarchy yells loudly and whispers subtly — constantly — that ladies, you really really wanna be one of the ones held aloft, if you want to be safe. Because no one in the locker room is talking about the legs or asses or pussies of another man’s wife, daughters or mothers.

“Women should be revered,” said some Republicans, and we women keep cringing. We don’t want to be revered, because that still places us on one or the other half of the divide. We get it — we are only revered in relation to our ability to impress you, to earn status through positive performance ratings from you. It’s hard for us to stomp and strut and take space when we’re teetering on the tiny real estate that is a pedestal.

And so locker-room talk isn’t just talk of women, it’s talk of a certain kind of woman. It’s talk of the dark half — the degraded feminine. This degraded half has a purpose. She not only invites men into a seemingly whimsical sexual conversation, but also inspires a kind of homosocial proximity: even worse than the conversation on the bus was the display we saw the moment the two men walked off the bus.

When Billy asked Arianne Zucker for a “little hug for the Donald,” things started to get even more awful. The way the two men code switched as comedy show for each other made my stomach turn. Here was the expanded Otherization, the move from behind the locker-room door to the light of day humiliation of her for one another. Here comes the dumdum who had no idea what we were saying. Little did she know what they want to do to her. Little did she know what the hug meant. They both knew.

How little she knew. Except now we all know.

The locker room is more than just a locker room. Women have locker rooms too, but mostly we just dry our hair and put our clothes on and talk about whether the yoga class was better or worse than last week’s. Please don’t blame the lockers. Or rooms.

Locker-room rules mean men’s locker-room rules, these rules of toxic testosterone, this inner sanctum where the dark rules are obvious: we leave our wives and sisters and daughters out of it, but all the other ones are fair game. Come with me, a man says, onto the bus, the back of the bus, this room that holds this other thing that men know about other men: secrets. This room calls too, it is a dark web of deliciously awful things that real men would never betray their membership in the man’s club to admit.

No wonder Republicans are blocking trans folk from those spaces, they don’t want anyone outing them. Because it’s here, in these gendered rooms, where men not only learn — but also learn to tolerate — this objectizing of women (and whichever thats are deemed stand-ins for women — meaning faggots, beta males or anyone otherwise ripe to be humiliated). And these hierarchies just keep going. White cis able-bodied educated males from the ruling class are at the top, holding nearly all of the power of the planet. You get access to this power if you’re married or related to one of these men. As you head down the pyramid, by daring to be perhaps — an unrelated white woman without a ring or poise, or gosh, a black woman, or a queer person or a trans person or a disabled person, your fall speeds up exponentially. Down down down at epic speed you go, to second- and third- and then a 10th-class citizen. Your legal rights drop away. Your safety. Your body rights drop away. You are not a body, you are a piece of a body now, you are being murdered slowly, with words and ideas.

The speedy lesson I’ve recently learned since creating Transparent has put me on the receiving end of the explosion of some gigantic myths about gender. I was hipped to the binary — and not just its use in making one into two, a.k.a. male and female.

I’ve begun to see a more devious use of the binary — how one-half can become energized with the addition of a third, a corroborator. Corroboration can help to stand up for what’s good in the world by aligning with the victim, or can create a team-of-two mentality that combusts into something evil. Ta-Nehesi Coates explained whiteness as subject-creating invention. If we’re both white, we’re not a that.

It’s the same with masculinity. Join the alphas in the locker room or be one of the others the moment you leave the room. This is how we do it: we casually reduce folks to bits — to specific characteristics to control, minimize and subjugate. We get to both imagine — and commit — acts of emotional and physical violence against them, shhhhhh. Close the locker-room door. Boys will be boys. Men will be men. Little do they know.

It’s time to change the reductive, dangerous binary definitions that simplify our understanding of each other. The sooner we acknowledge the continuum on which our lives exist the sooner we’ll respect each other and embrace our glorious diversity. It’s imperative that we vote with this in mind. You know what to do. 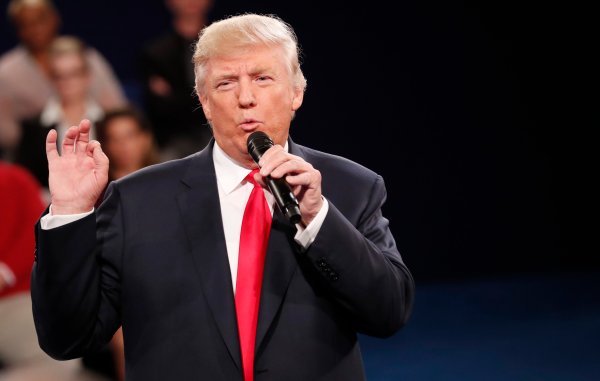 Why Donald Trump’s Transition From Sexual Assault to ISIS Made Sense
Next Up: Editor's Pick