It’s a scene straight out of a movie. Billi West and her son, Zachary, were driving south on a highway in Florida in the wake of Hurricane Matthew, which roared through the Caribbean and up against the southeastern U.S. last week, to see if their lake property had suffered any damage in the storm. A traffic light was out, so it was when they were at a four-way stop that they saw it: a grey sedan, turning in front of them, with an eagle lodged in the grill.

“Some people put hood ornaments on their cars so when I first saw it, I said to my son, ‘did you see that?” West recalled. “Then it turned and looked at me, and I turned to my son … ‘Oh my gosh, it’s alive!'”

West, a branch manager of a mortgage company in Fleming Island, said she honked to the car in front of them to let them know they were turning early. After speeding up as her son waved down the driver, an elder man, the car stopped. They all moved out of the way of traffic and West called her husband in the Clay County Sheriff’s Office. He didn’t believe her at first and later sent colleagues to the scene. “We were kind of afraid to touch it,” she said. “At that point, he was a little lethargic.”

The driver, who West said did not want to be identified, told her he was on the way to the bank to deposit a check when two eagles flew in front of him. When he looked in his rearview mirror, he saw one flying away, so he didn’t think he actually hit one. “He had no way of knowing he hit the eagle until we stopped him,” West said.

“We called fire rescue, thinking they would have thick gloves and a jacket, and my son ran to our house to get a dog kennel,” she said. After an unsuccessful attempt to unscrew the car’s grill and free the bird, another officer suggested cutting the grill. The driver agreed. With something like a hacksaw, they pushed a piece of the grill back and eased the eagle into the crate.

West poses for a selfie with the eagle after it was freed.
Billi West

West drove the eagle to the B.E.A.K.S. wildlife rehabilitation sanctuary—and snapped a selfie with it before handing it over. Once there, she and her son were asked what to call it: “We named him Matthew.”

Later, she posted privately about the encounter on Facebook. After a friend asked her to make it public so she could share it too, it went viral.

West got a phone call from B.E.A.K.S. on Monday, who told her they were continuing to monitor the bird, estimated at about seven years old, before releasing him. On Tuesday, the sheriff’s office posted a picture of Matthew and said, “You are looking great today!” 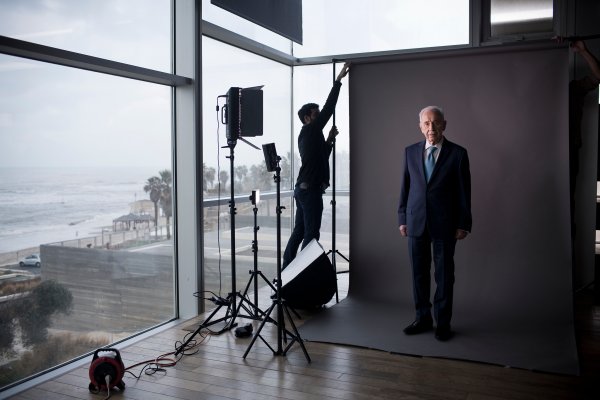 A Few Minutes, and a Selfie, With Shimon Peres
Next Up: Editor's Pick