A view inside Ashdown Forest on Oct. 10 2016, which inspired A. A. Milne’s Enchanted Forest in Winnie the Pooh. Christopher Robin believes it to be enchanted because no one can count whether there are 63 or 64 trees.
Kate Samuelson—TIME
By Kate Samuelson

When Winnie-the-Pooh was first published on Oct. 14, 1926—90 years ago this Friday—author A.A. Milne introduced the world not only to a menagerie of beloved characters, but also to a place that has captured the imaginations of countless readers: the Hundred Acre Wood. And, just as Pooh was inspired by a real toy bear, that forest of the imagination was inspired by a real place too.

To commemorate Pooh’s anniversary, TIME took a trip to Ashdown Forest, the 6,500-acre wood just 40 miles southwest from London that inspired Milne’s depiction of Pooh’s neighborhood. Though the Forest remains idyllic for now, its future will depend on an ongoing battle between its past—both literary and natural—and its present.

Ashdown Forest receives over one million visitors per year, many of whom are Winnie the Pooh fans hoping to explore the Enchanted Forest, catch Heffalumps in Pooh’s Cunning Trap and pay a visit to Roo’s Sandy Pit, a disused quarry that is not so sandy anymore. (Though the book’s original title was the hyphenated Winnie-the-Pooh, that punctuation was lost in later adaptations.)

But, aside from a simple memorial commemorating A. A. Milne and Pooh illustrator E. H. Shepherd—located at the spot where Milne, and later his son, Christopher Robin, would write—the Forest contains not a single image of the yellow, honey-loving Disney creature that bears a long association with Milne’s beloved books. The closest thing the Forest has to a Pooh-related product is a “Pooh Walks” leaflet that guides visitors to locations of interest.

A memorial commemorating A. A. Milne and Pooh illustrator E. H. Shepherd, at the spot where Milne, and later his son, Christopher Robin, would write, on Oct. 10 2016
Kate Samuelson—TIME

“Ashdown Forest is an extremely special and unique place, but Winnie the Pooh is just one aspect of it,” Pat Buesnel, the Director of Ashdown Forest, told TIME. “We wish to maintain the Forest in the spirit of Milne’s stories, which are all about enjoying the natural environment and being free to discover it.”

But, as it turns out, maintaining the Forest in the way Milne knew it is not so easy. That’s because the way the Forest looked in the early 20th century—with open fields abutting more heavily wooded areas, allowing visitors to enjoy the beautiful views as well as the trees—was the result of a very precise kind of interaction between humans and nature.

The land, originally a deer-hunting park, is owned by the Ashdown Forest Trust, with members of East Sussex County Council as trustees. Since 1885 it has been managed by a board of conservators, who employ 12 members of staff including four rangers. The team have a duty to conserve and protect the Forest, as well as provide open access to visitors and allow the roughly 790 “commoners” who live on the land to exercise their rights to graze animals or cut wood or bracken, although Buesnel said that not many of them do. That grazing, however, was a crucial part of the way the land came to look the way it did in Milne’s day.

“Without people cutting and grazing on the land, all the lovely open landscapes Milne was familiar with would quickly disappear and become woodland,” said Steve Alton, a Conservation Officer based at the Ashdown Forest Center.

Because the rate of grazing has so declined, the officials who manage the land employ a herd of cattle, Exmoor ponies and sheep to help out. They also clear land with controlled forest fires and cut the bracken and gorse.

Conserving the Forest that way costs money, and that money is provided entirely by European Union funding as heathland (which is rarer than tropical rain forest on a global scale) is one of the organization’s priority habitats to protect. But the future of this funding is now uncertain, as the U.K. comes to terms with the June vote to leave the E.U.

Wealden, the East Sussex district that contains most of Ashdown Forest, voted to leave by 54.5%, but Alton believes that locals were unaware of the impact of that decision on the conservation of nearby land. He says that the U.K. government has promised to guarantee funding for the Forest for at least five years, and hopefully ten, but that what will come next remains unknown. “We are worried about the long-term future,” he says, “particularly as some of our posts are paid for entirely out of this money.”

Public perception, he added, is a big issue. “I don’t think people realize what we do around here, never mind where our money comes from. They see us going out and cutting down trees and decide that we’re destroying the environment. We try and explain that the vistas they love rely on us doing this work, but it’s hard.”

The Pooh Corner shop in Hartfield, the village that was home to the country farm Milne bought in the early 1920s, on Oct. 10 2016.
Kate Samuelson—TIME

As the long-term future of the Forest remains uncertain, tourists continue to flood to the Forest to photograph themselves playing Poohsticks, searching for the North Pole or streaming into the one place with a Disney license: Pooh Corner, a Pooh-paraphernalia-packed shop complete with a Piglet tearoom, in Hartfield, the village that was home to the country farm Milne bought in the early 1920s. Unsurprisingly, the 90th anniversary has seen a spike in the number of visitors to the Forest, putting further strain on the upkeep of the area.

“Coach-loads of people come to Hartfield, then walk to Pooh Bridge to play Poohsticks,” Buesnel says, “but there are no sticks left now.” 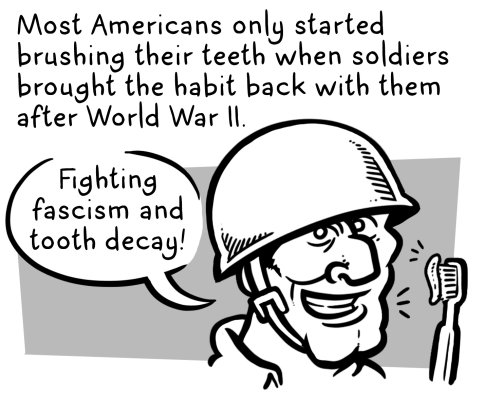 How World War II Made Americans Brush Their Teeth and Other Illustrated Facts From History
Next Up: Editor's Pick