Selfie trends come and go like the seasons: duck faces, planking, fingermouthing, videoing oneself dancing to “Closer.” The latest photo-friendly move to sweep Twitter, however, is not recommended for those who are protective of their precious cellular devices, because it involves putting your phone itself in harm’s way by tossing it into the air.

On Saturday, Twitter user Seth Schneider discovered that he was able to take a mirror selfie… while clapping (or, in his parlance, high-fiving himself). That blurry picture—with his phone captured in its midair descent—caught on, and has been liked half a million times and been retweeted more than 170 thousand times (and counting). People have been taking to the platform to share their own generally very blurry versions of this questionable accomplishment, too.

Some of the imitation attempts are more successful than others. And some have taken the trend to new heights, incorporating dabbing and disappearing acts altogether.

That’s what living on the edge looks like in the modern age. Carry on, Internet. 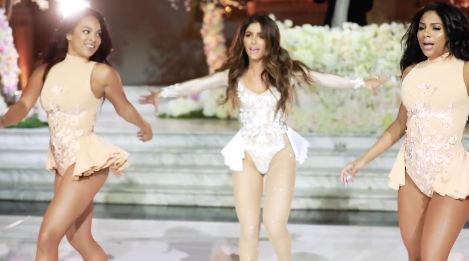 Here's the Flawless Beyoncé-Inspired Wedding Dance You've Been Waiting For
Next Up: Editor's Pick