King of Thailand in Unstable Condition

Thai King Bhumibol Adulyadej leaves Siriraj Hospital in Bangkok, on May 10, 2015 to return to his seaside palace after being hospitalized since Oct. 2014 when he had his gallbladder removed.
Sakchai Lalit—AP
By Suyin Haynes

88-year-old King Bhumibol Adulyadej of Thailand is in unstable condition following hemodialysis treatment, according to a statement released from the Thai palace on Sunday.

According to the palace King Bhumibol, who is the world’s longest reigning monarch and a unifying symbol for a divided Thailand, had received hemodialysis treatment, which is used to purify the blood, but the palace said that the treatment had made his blood pressure drop occasionally. “His condition has yet to stabilize,” the statement said. As Reuters reports, the wording and timing of the statement is unusual, as the palace normally only issues statements when the king is recovering or showing signs of improvement.

Thailand has restrictive “lese majeste” laws, which prohibit defaming, insulting or threatening senior members of the royal family. Public discussion of the monarch’s health is severely curtailed—which is what made Sunday’s statement stand out. Thailand’s stock index fell as much as 3.6% on Monday and the baht currency dropped to its lowest level in more than two months.

The king was last seen in public on Jan. 11, but has spent much of the past year at Bangkok’s Siriraj Hospital. A statement on Oct. 1 from the palace said that the king was recovering from a respiratory infection. Speculation over the king’s health comes during a turbulent period in the country, as a controversial recent referendum cemented the power of the military junta that took power in the 2014 coup. 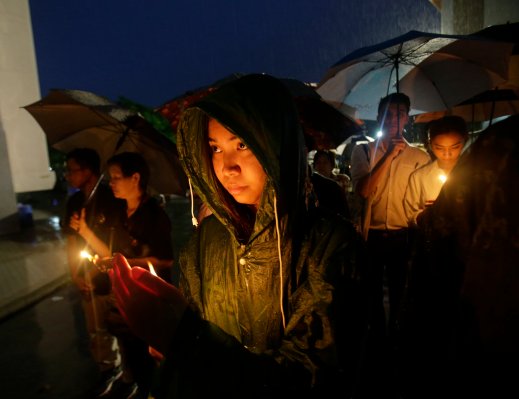