The Nobel Economics Prize went to Oliver Hart and Bengt Holmström for their pioneering contributions to contract theory, the Royal Swedish Academy of Sciences announced Monday.

British-born Hart and Finland-born Holmström created insights that “are valuable to the understanding of real-life contracts and institutions, as well as potential pitfalls in contract design,” the Academy said in a statement. In other words, they were awarded for creating theoretical tools on how to write contracts— for employers and their workers or companies and their customers— that will ensure mutually beneficial behavior.

Here’s what you need to know about this year’s winners:

Both academics teach in Cambridge, Mass.

Hart, 68, is the Andrew E. Furer Professor of Economics at Harvard University, where he has taught since 1993. He was born in London and studied at University College London, Cambridge University and Warwick University before receiving his Ph.D. in 1974 at Princeton,.

Helsinki-born Holmström is the Paul A. Samuelson Professor of Economics and Professor of Economics and Management at Massachusetts Institute of Technology (MIT), and his been on the faculty since 1994. He received his Ph.D from Stanford University’s Graduate School of Business and previously taught in Northwestern and Yale. He has also served on the board of mobile phone company Nokia.

Holmström demonstrated in the late 1970s how a company’s owners should design contracts for people hired as top executives. His ‘informativeness principle’ stated how their contract should link the executive’s pay to performance-related metrics. He said the best sort of contract provides the right balance of risks and incentives, which according to the Guardian encourages top executives eschew recklessness for innovation. His later work, according to the Academy, “generalized these results to more realistic settings, namely: when employees are not only rewarded with pay, but also with potential promotion; when agents expend effort on many tasks, while principals observe only some dimensions of performance; and when individual members of a team can free-ride on the efforts of others.”

Holmström said his interest in contract theory came while he was working for a company in the 1970s that attempted to use computers to figure out a way to make strategic plans. “That’s when I realized that the issue wasn’t really about the difficulty of coming up with the best plans,” he said after winning the award. “The bigger issue was also to create incentives for people to give the right information that is needed for these plans and incentivize them in general.”

Hart’s work has shown the failings of private prisons

His speciality in the theory of incomplete contracts “shed new light on the ownership and control of businesses,” the academy said. The research went on to inform new theoretical tools for questions “such as which kinds of companies should merge, the proper mix of debt and equity financing, and when institutions such as schools or prisons ought to be privately or publicly owned.”

His work showed that cost reduction and improvements to quality are the two conflicting forces at work when a government decides whether it should privatize a service or run it on its own. A 1997 paper showed that private contractors have a strong incentive to cost reductions, which can result in a drop in quality. Hart cited the U.S. prison systems as an example in a paper written in the 1990s. “Federal authorities in the United States are in fact ending the use of private prisons, partly because— according to a recently released U.S. Department of Justice report—conditions in privately-run prisons are worse than those in publicly-run prisons” the academy said.

Hart is the second consecutive British national to win the Award

He receives the prize a year after Angus Deaton, who won the award in 2015 for his findings on the study of consumption. In response to his win, Hart told reporters: “I woke at about 4:40 and was wondering whether it was getting too late for it to be this year, but then fortunately the phone rang… my first action was to hug my wife, wake up my younger son… and I actually spoke to my fellow Laureate.” 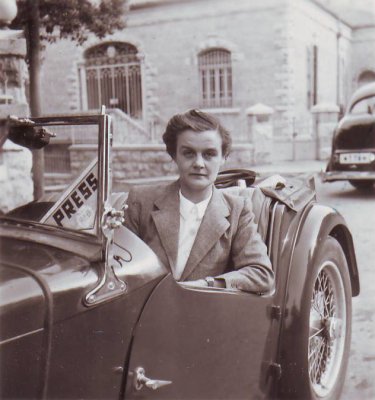 The Female War Correspondent Who Scooped the World
Next Up: Editor's Pick