After a first presidential debate in which Donald Trump repeatedly talked over both Hillary Clinton and moderator Lester Holt, the Republican nominee was more verbally subdued in the second face-off on Oct. 9, even as he elevated his attacks to new levels. In fact, Trump’s interruption count of 15, according to an analysis of the transcript, was fewer than the combined interjections of moderators Martha Raddatz and Anderson Cooper, who had seven and 11, respectively. (Clinton interrupted Trump or the moderators five times.)

By comparison, Trump’s count in the first debate was 55, similar to those of Tim Kaine and Mike Pence, who repeatedly talked over one another during the vice presidential debate. You can see every line from Tuesday’s debate in the interactive below. Interruptions are outlined in black.

Of course, not everyone agrees on what counts as an interruption, as FiveThirtyEight recently documented. Rather than counting interruptions by hand, which is prone to inconsistency, this analysis uses the Congressional Quarterly transcripts for its tallies.

Correction: This post originally misstated the date of the second debate. It was Oct. 9. 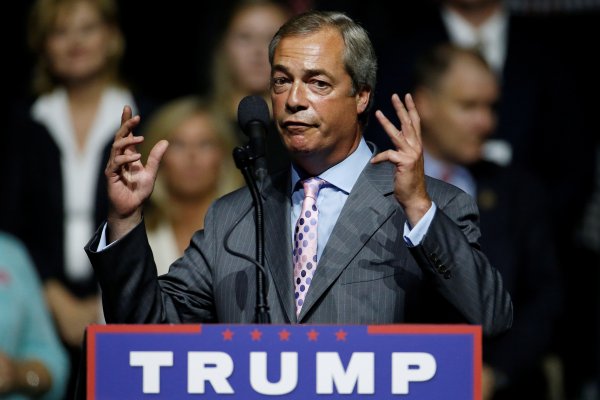 Donald Trump Still Has a Friend in Britain’s Nigel Farage
Next Up: Editor's Pick