Well, we still have a campaign. Against all odds, against all pundits, against much of the leadership of the poor, poor Republican Party, Donald Trump breathes to bloviate another day.

He will probably lose this election. I saw nothing in the second debate that might convince someone who doesn’t think Hillary Clinton belongs in jail that she actually does belong there. But Trump said she belongs there—which made Sean Hannity, Rush Limbaugh and perhaps a third of the American electorate very happy.

More important, Trump didn’t say or do anything that resembled a final nail in his coffin. His eyes didn’t pinwheel, he didn’t splutter incomprehensibly, he didn’t lose his temper, he didn’t curse. He met and exceeded expectations for his performance, a bar that was no higher than a door sill.

Did he win the debate? Perhaps—he did have Clinton on the defense throughout. He leveled so many lies and exaggerations and wild charges that she could not answer them all. His assertions about her emails, about the various unproven charges against Bill Clinton leveled by the poor women he assembled for a press conference, about Obamacare, about—well, you pick it—were outlandish, misleading and false.

But here is the key to this debate and the Trump campaign: if the media set a low bar for Trump, he set an even lower bar for the American public. His constant refrain that Clinton had spent 30 years in public life and yet we still have all these problems—an unfair tax code, a faulty health insurance system, problems with immigration and terrorism, cancer, psoriasis—assumed that Clinton, all by her lonesome, was unable to do anything effective. Actually, that’s not fair: his real point was that politics as usual had not solved these problems. And our public has been trained, by a rating- and click-hungry media, to disdain politics as usual. (Let me plead guilty to being militantly in favor of a slow-moving, compromise-seeking, deliberative democracy.)

Hillary Clinton’s problem in the second debate was the same as that of all Trump’s Republican opponents in the primary debates: it’s difficult to argue that we are not going to hell in a handbasket. When a demagogue says—ridiculously—that you should be in jail or you have “low energy” or that your father was complicit in the assassination of John F. Kennedy, there is no rational response. If you start to defend yourself—“Jail? Oh c’mon Donald”—you’re being defensive.

And if you start to defend our country, you’re in a similar fix. The truth is, we’re in the midst of a historic, civilizational paradigm shift, from a national to a global economy, from the industrial age to the information age. We’ve had problems with the transition, but we’re doing pretty well compared to, well … every other country in the world. (Including Mexico and China, the countries that Trump claims are taking us to the cleaners.)

It is difficult for even a very good politician to make that argument, and Hillary Clinton, as she demonstrated in the second debate, is not a very good politician. She is a barely competent politician. She did not lose any votes with her uninspired performance; her supporters and those who understand that Donald Trump is a poisonous threat to our democracy are still with her, which will probably be enough to win this election. She demonstrated, yet again, that she has a patient, presidential temperament. At times, when actual questions about policy were asked, she demonstrated an ability to answer them.

But she let Trump get away with murder. I can’t remember a single sharp response, a single moment when she had him on defensive. Instead of responding to the Access Hollywood tape by asking, “I’m curious, Don, what did Melania and Ivanka think of that little performance?”—she went off into the abstract, numbed down language about him being “unfit” for the presidency. We already knew that. It probably would have been better for her to say, “At a certain point, I’m just at a loss for words—and so I’ll let the Access Hollywood tape, and your comments about Mexicans and Muslims, and all the other intolerable, un-American things you’ve said, speak for themselves.”

If Trump proved he wasn’t dead, Clinton did not prove that she was quite alive—again, she was all about four-point plans not unifying visions. She didn’t speak directly to the Americans so alienated that they support this charlatan. And if the bar for Trump was ridiculously low, the bar for Clinton remains very high—even her supporters expect something more from her than sanity and competence. They expect her to say something that can carry us beyond this nightmare. They expect her to say something that puts the smallness of Trump and the greatness of America into context.

That’s not easy, especially in a year when so many words, so much analysis and ugliness and theatrical extravagance has been put to such banal use. But transcendence, and finding a way to move forward is, by definition, the true definition of a leader. Lucky for her, we don’t need a particularly great leader right now—just someone who isn’t an ignorant, narcissistic, crude, bigoted liar. 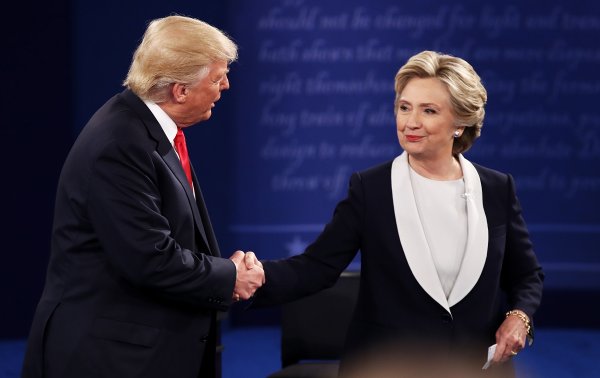 How Social Media Reacted to the Second Presidential Debate
Next Up: Editor's Pick