Why Donald Trump's Call for a Special Prosecutor Is Different

Donald Trump promised at the presidential debate Sunday night that, if elected, he would appoint a special prosecutor to investigate Hillary Clinton’s use of a private email server.

“If I win, I am going to instruct my attorney general to get a special prosecutor to look into your situation because there has never been so many lies, so much deception,” he said, repeating a vow he first made at the presidential debate Sept. 26.

If Trump is elected and actually follows through on that promise, it would be the first time in recent history that a sitting President ordered an attorney general to use federal power to prosecute a political rival.

The U.S. Department of Justice announced in July that it would not prosecute Clinton or her aides over their use of a private email server during her tenure as Secretary of State. FBI Director James B. Comey added that while Clinton and her staff were “very careless” in their handling of classified information, there was no evidence of criminal behavior.

At the debate, Clinton did not respond directly to Trump’s promise to appoint a special prosecutor, instead opting to question her opponent’s temperament.

Trump’s vow seemed designed to be largely a political jab — the natural extension of his campaign’s narrative about both Bill and Hillary Clinton’s allegedly criminal behavior.

While special prosecutors have been appointed periodically in U.S. history — to investigate the Teapot Dome bribery in the 1920s and tax scandals of the 1950s, for example — the job has risen to public prominence in the past 40 years.

In 1973, President Richard Nixon, in an effort to exonerate his own administration, ordered his attorney general, Elliot Richardson, to move forward with an independent investigation of the emerging Watergate scandal. Richardson tapped Special Prosecutor Archibald Cox to investigate the Nixon administration’s role in the events. When Cox tried to force Nixon to turn over tape recordings of his conversations in the White House, Nixon ordered Richardson to fire him. Richardson refused. Nixon later fired both Richardson and his successor.

On Sunday night, former U.S. Attorney General Eric Holder, who served from 2009 to 2015, referenced the famous political showdown in a tweet:

In the wake of the Watergate scandal, Congress passed the 1977 Ethics in Government Act, which put the onus on the attorney general to review a case, conduct a preliminary investigation and consult a three-judge panel, which would then appoint an “independent counsel.” In the early 1990s, the Clinton administration revived the law, which was then used to appoint, among others, independent counsel Starr, whose investigation led to Clinton’s impeachment in 1998.

The law authorizing judge-approved independent counsels lapsed in 1999. Under current law, the U.S. attorney general has a fairly wide purview to appoint a special prosecutor if she believes a criminal investigation is warranted or if the U.S. Justice Department cannot conduct the investigation independently, according to the Center for Legal and Economic Studies.

So while it would be legally possible for a President Trump to demand that his attorney general appoint a special prosecutor to investigate a former political opponent, it would be a first. 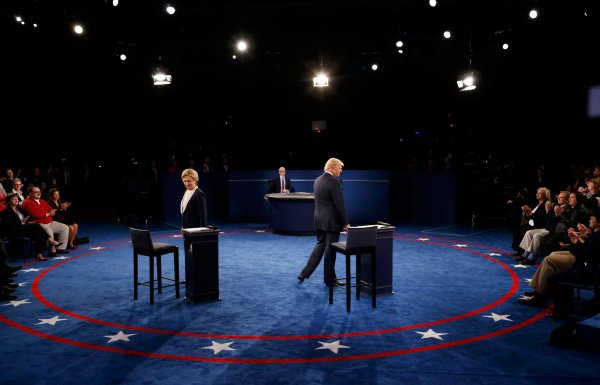 The Debate Audience Laughed, Cheered and Clapped—Again
Next Up: Editor's Pick