Donald Trump Openly Disagreed With His Running Mate on Russia

Donald Trump during the second presidential debate openly disagreed with his running mate, Indiana Governor Mike Pence, over the U.S.’s policy in Syria.

The difference in policy became apparent when moderator Martha Raddatz stated Pence’s position when asking Trump repeatedly about his views over solving the humanitarian crisis in Syria.

“I want to remind you of what your running mate said,” said Raddatz. “He said provocations by Russia need to be met with American strength and that if Russia continues to be involved in airstrikes along with the Syrian forces of Assad, the United States should be prepared to use military force to strike military targets of the Assad regime.”

Trump said he disagreed with his running mate. “He and I haven’t spoken, and I disagree,” Trump said.

It is nearly unprecedented for disagreements between running mates to become so public during a presidential election.

Trump and Pence have numerous disagreements in policy, including over the Trans-Pacific Partnership (Trump opposes it, Pence has said in the past he supports it), immigration (Trump has called for a deportation force to deport all undocumented immigrants, Pence has not), among others.

But in the past, Pence has denied the two have differences, saying in the vice-presidential debate, “There’s no daylight between Donald Trump and I on that or any other issue,” referring to Syria. 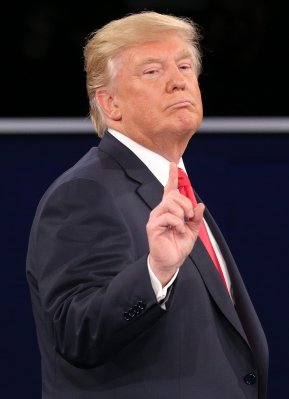 Trump Broke His Own Rule About Revealing Your Plans to the Enemy
Next Up: Editor's Pick