Donald Trump tried to downplay a leaked video of sexually-charged comments he made towards women as “locker room talk” Sunday at the second presidential debate.

“This was locker room talk. I’m not proud of it, I apologize to my family, I apologize to the American people,” Trump said before turning the conversation from footage of him saying lewd comments that leaked Friday to rhetoric about combating ISIS.

“This is like medieval times, we haven’t seen anything like this, the carnage all over the world,” the Republican nominee said.

The billionaire denied having done any of the actions he implied in the leaked footage, when asked by moderator Anderson Cooper. “I was embarrassed by it, but I have tremendous respect for women and women have respect for me,” Trump said. 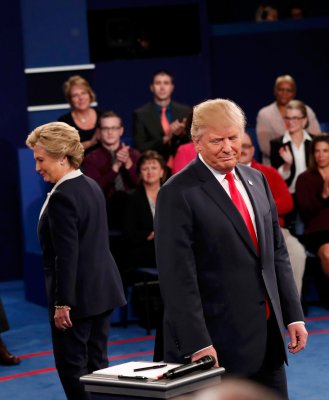 Watch Clinton and Trump Not Shake Hands
Next Up: Editor's Pick