How Donald Trump Turned 2016 Into a Referendum on Gender

If 2016 was going to be a Battle of the Sexes, everyone thought Hillary Clinton would be the main combatant. She’s the first woman to win a major-party presidential nomination, after all.

But nothing has gone as expected in 2016: Trump, not Clinton, has made this cycle the most gendered presidential election in history. For all the historical significance of a woman taking a shot at the White House, the Republican nominee has made more headlines running as a man than Hillary Clinton has running has a woman.

The leak of a tape Friday in which Trump boasts in vulgar language about sexually assaulting women and attempting to have sex with a married woman were just the latest and most extreme examples of Trump’s alpha male campaign.

After Fox News journalist Megyn Kelly asked him a tough question at a primary debate about his treatment of women, Trump said he had “no respect for her as a journalist” and said she had “blood coming out of her nose, blood coming out of her wherever.” He also called her a “bimbo” on Twitter and alluded to an old interview in which she discussed her sex life. He called Hillary Clinton “disgusting” for taking a bathroom break (the same word he once used to describe a female lawyer who once requested a break to pump milk) and said she “got schlonged” by Barack Obama in the 2008 primary race. He slammed GOP primary opponent Carly Fiorina for her appearance, saying “look at that face, would anybody vote for that?” He retweeted a crude meme that suggested Ted Cruz’s wife Heidi Cruz was less attractive than Melania and also retweeted an insinuation that Jeb Bush is sympathetic to illegal immigrants because his wife is of Mexican ancestry (he later deleted this tweet.)

He defended his then-campaign manager Corey Lewandowski after he was charged with simple battery assaulting a female reporter at a rally, and said he was not going to “destroy a man for that.” (The charges were later dropped.) He has demeaned several major female political figure in the U.S. today, from Massachusetts Sen. Elizabeth Warren (who he has called “Pocahontas”) to Fed Chair Janet Yellen (who he has said is keeping interest rates low at the behest of President Obama) to Supreme Court Justice Ruth Bader Ginsburg (who he called “dumb” after she criticized him) to Attorney General Loretta Lynch (who he said must have been bribed by Clinton). He tried to discredit vocal critic Alicia Machado (the former Miss Universe he called “Miss Piggy”) by calling attention to a nonexistent sex tape. He accused Hillary Clinton of “playing the ‘woman card'” and has said she doesn’t have “a presidential look” or the “stamina” to be Commander in Chief, and questioned her sexual fidelity to her husband, with zero evidence. He interrupted her at least 55 times during the first presidential debate, often rudely.

In any normal political year, just one of these actions would have been deemed a gaffe, a moment that the campaign quickly moved to correct or disavow. But until his videotaped apology for the lewd Access Hollywood interview, Trump had never apologized. In most cases, he had doubled down on his criticism instead, another tendency of the alpha male. And his core supporters—both voters and members of the D.C. Establishment—stood by him.

That made these something other than gaffes. It was the political equivalent of the old software maxim that something is a feature, not a bug. Trump wanted to fight his campaign on gendered lines, and the voters who backed him did too.

To be sure, Clinton is definitely emphasizing the historic significance of her gender more than she did in 2008. When she ran against Obama, she didn’t really focus on her gender until her concession speech about “18 million cracks in the glass ceiling.” This time around, she has subtly woven her gender into almost every aspect of her campaign. She frequently refers to herself as a “grandmother,” her campaign posts letters from little girls who look up to her, and she’s made child care, equal pay and paid family leave a central part of her stump speech. She gave her first speech as a presumptive nominee to Planned Parenthood, where she said the word “abortion” 16 times (the only president to address Planned Parenthood was Obama, and he never said that word.) In her first appearance at the Democratic National Convention this year, she had a message for the next generation of female politicians: “If there are any little girls out there who stayed up late to watch, let me just say: I may become the first woman president, but one of you is next.”

But Hillary Clinton is a presidential candidate who happens to be a woman: Donald Trump is a man for whom the presidency is the ultimate validation of his masculinity. His maleness is the major theme of his presidential run. All of his most compelling assets (his charisma, his emphasis on “strength,” his brute force of conviction) and his most crippling weaknesses (his bullying, his lack of preparation, his sexual innuendo) are ultimately rooted in his gender.

His surrogates and supporters take their cues from the top. Chants of “Lock Her Up” reverberated throughout the stadium at the Republican National Convention, after New Jersey Gov. Chris Christie prosecuted Clinton’s email misconduct in his speech (no recent male candidate has ever been threatened with incarceration by the opposing party in such a public way). A doctor who is a Trump supporter made an ad offering free testosterone tests to any man voting for Clinton. Vendors at Trump events sell buttons and T-shirts with slogans like “Trump That Bitch” and “Hillary Sucks, But Not Like Monica,” and some online sellers say their anti-Hillary merchandise is a hundred times more popular than their anti-Trump merchandise. Different men in different states have offered the same explanation for Trump’s appeal: “his balls.”

Whenever Trump is criticized for his behavior, he often responds with contempt for political correctness, which seems to play well with this base. Even his pronouns are telling. “All of the men, we’re petrified to speak to women anymore,” he said at a rally in Spokane, Washington, in May. “The women get it better than we do, folks.”

So none of Trump’s behavior towards women is particularly new. But when a tape like this is released just before the election, it can have sticking power: just ask Mitt Romney, who made several tone-deaf comments about class throughout his 2012 campaign, but the one everyone remembers is the 47% comment, which was released in September 2012. Or George W. Bush, who barely scraped by in the 2000 election after an early November revelation that he had once pleaded guilty to a DUI.

By comparison, the Trump tape is a perfect storm of political destruction. It’s a leaked tape, which is almost always more damaging than anything that is willingly released. It includes lewd language, sexual innuendo and a disdain for the institution of marriage, which will surely offend many conservatives. It includes broad contempt for the basic principles of sexual consent, which will surely offend many women and young people (especially college students who are especially well-educated about consent). And perhaps most damaging: the tape isn’t an aberration for Trump, it’s a confirmation of a long-suspected and well-documented pattern of behavior. Supporters who had turned a deaf ear to Trump’s treatment of Alicia Machado, Megyn Kelly, Carly Fiorina, Miss Universe contestants, Apprentice contestants and Hillary Clinton could have a hard time ignoring something like this.

But it’s Trump’s initial defense could be the the most telling tidbit of all: he initially excused the comments as “locker-room banter,” essentially a “boys will be boys” argument. In other words, his excuse was that he is a man, and this is how men act.

It’s impossible to know whether Trump would have been chosen as the GOP nominee if Hillary Clinton were not the Democratic frontrunner. But it’s clear that Trump performs his maleness more than any previous presidential candidate, often in ways far beyond what other men have deemed appropriate.

The November election has turned into a referendum on gender, but it was Trump who chose to fight on that battleground. And if he loses because of it, he’ll have only himself to blame. 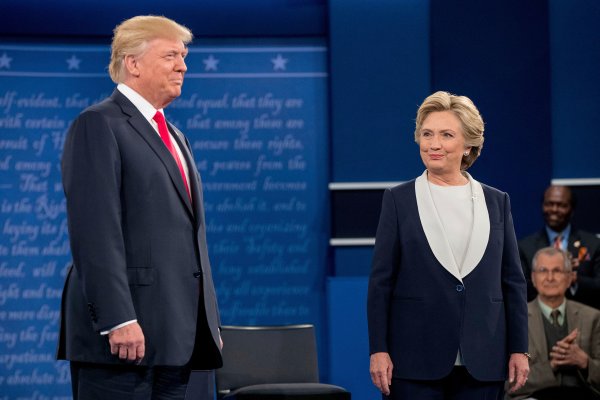 Gloves Off at Debate
Next Up: Editor's Pick