The revelation of video of Donald Trump’s vulgarity-laced description of women before an interview in 2005 is sending shock waves through the Republican Party just two days before the second presidential debate.

Already facing historic deficits among women voters as he competes for the presidency with Hillary Clinton, the first woman to be the nominee of a major political party, Republicans fear that Trump’s comments won’t just doom their hopes of recapturing the White House, but also jeopardize down-ticket races across the country. “Akin-esque,” was how two veteran Republican operatives independently described Trump’s comments to TIME, referencing Todd Akin, the 2012 GOP Senate candidate whose use of the phrase “legitimate rape” sparked a nationwide backlash against Republicans and doomed their hopes of winning the Senate majority that year.

The footage of Trump, first reported by The Washington Post, features the Republican nominee describing the supposed perks of being a celebrity, apparently suggesting he sexually assault women without repercussion. “And when you’re a star, they let you do it. You can do anything,” Trump says in conversation with NBC’s Billy Bush, then of “Access Hollywood.” “Grab them by the p—y,” he continued. “You can do anything.”

Within hours, the GOP was in full-on damage control mode. “No woman should ever be described in these terms or talked about in this manner. Ever,” said RNC Chairman Reince Priebus in a statement Friday evening. As Trump’s advisors huddled at Trump Tower to determine what, if anything, could be done to mitigate the damage, state party officials and lawmakers furtively traded notes about possibly rescinding their endorsement of Trump. Utah Gov. Gary Herbert and Rep. Jason Chaffetz were on the vanguard of lawmakers taking back their previous statements in support of the GOP nominee. The U.S. Chamber of Commerce’s political director called on Trump to resign as the nominee to allow his running-mate, Indiana Gov. Mike President, to take on the party’s mantle. But the untested maneuver is unlikely to come to pass, as ballots have already been printed and distributed.

Making matters worse is the timing of the release—just hours before a unity fundraising rally in Wisconsin set to feature Trump, Pence, Priebus, Speaker of the House Paul Ryan, and Wisconsin GOP Sen. Ron Johnson. The GOP establishment’s reluctant embrace of Trump has always been one of necessity, for the simple reason that they need his supporters to turn out as much as he does. But Trump’s latest comments are testing even that.

In a statement late Friday, Ryan, who was slow to embrace Trump even once he became the presumptive Republican nominee, announced that Trump would not longer be attending the Saturday event, which Ryan was hosting. The Republican nominee had been disinvited. “I am sickened by what I heard today,” Ryan said. “Women are to be championed and revered, not objectified. I hope Mr. Trump treats this situation with the seriousness it deserves and works to demonstrate to the country that he has greater respect for women than this clip suggests.”

For decades Democrats have held an advantage with women, who make up a majority of voters. But Clinton’s candidacy has expanded the gender gap potentially to record highs, with recent surveys showing a 13-percentage point gap between the sexes. “If Trump doesn’t fix this it’s going to be a bloodbath,” said one Republican operative working to hold the GOP Senate majority. “And I don’t think this is fixable.”

The resurfaced video comes as tens of millions of Americans are beginning to cast early ballots across the country, giving the GOP little time to undo the damage. Many other Republican lawmakers were quick to try to distance themselves from their party’s nominee.

“Donald Trump’s comments were outrageous and unacceptable,” tweeted Pennsylvania Sen. Pat Toomey. New Hampshire Sen. Kelly Ayotte issue a statement calling the comments “totally inappropriate and offensive.” But like most national Republicans, they did not pull back their endorsement.

The party’s 2008 nominee, Arizona Sen. John McCain said there are “no excuses” for Trump’s comments. “No woman should ever be victimized by this kind of inappropriate behavior,” McCain said. “He alone bears the burden of his conduct and alone should suffer the consequences.”

The comments at the top of the ticket are likely to trickle down. Akin’s statement fed a Democratic-pushed narrative that the GOP was waging a “war on women,” which was only magnified by nominee Mitt Romney’s mealy-mouthed pronouncement that he used “binders full of women” to staff his governor’s office when he was Massachusetts governor. In its autopsy on the 2012 race, the RNC called for an aggressive outreach to women voters, but like Trump’s insults toward the African-American and Hispanic communities, many in the party now believe Trump’s candidacy is will unravel the efforts of the last four years. “He’s setting us back at least a century in how we talk to women and minorities,” said one RNC member. “We’ll be feeling the pain from this for years to come

Romney, who has declined to endorse Trump, condemned his comments, as did former Florida Gov. Jeb Bush. Illinois Sen. Mark Kirk, who has not endorsed Trump and is the most precariously-positioned Republican in the Senate, called his party’s nominee “a malignant clown – unprepared and unfit to be president of the United States.”

In a statement after the video was released, Trump dismissed the remarks as “locker room banter,” and apologized for causing offense, but not for using the lewd language. “This was locker room banter, a private conversation that took place many years ago,” Trump said. “Bill Clinton has said far worse to me on the golf course – not even close. I apologize if anyone was offended.”

Senate Majority Leader Mitch McConnell called on Trump to issue a full-throated apology for his comments. “Trump needs to apologize directly to women and girls everywhere,” he said.

In a second statement, Trump made no reference to being disinvited from the Ryan event, but said he would be represented by Pence and that he’d spend the day Saturday in debate preparations with New Jersey Gov. Chris Christie, Alabama Sen. Jeff Sessions, and Priebus. 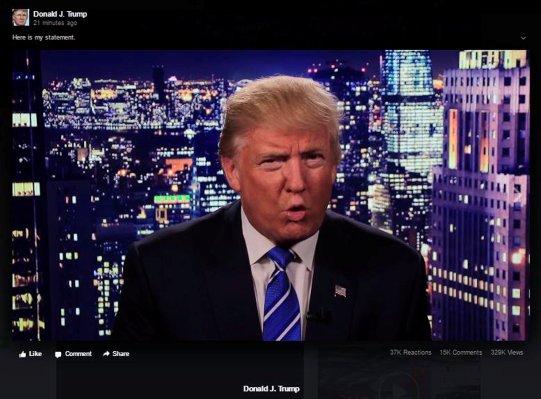 How a Leaked Tape of Donald Trump Bragging About Groping Women Changed the 2016 Race
Next Up: Editor's Pick