The Creepy Clown Craze Is Now Taking Over the World: 'It Is Very Alarming'

The creepy clown craze that has consumed parts of the country recently has now spurred “copycat” incidents beyond the U.S.

The phenomenon that has fixated Americans, reaching more than two dozen states, has prompted police in England, Australia, Scotland and Canada to investigate multiple reports of scary clown sightings, according to local news outlets.

In one of the incidents, a group of children in the U.K. told authorities that a knife-wielding man wearing a mask and a clown outfit leaped in front of them on Friday but left them unharmed, The Guardian reports.

“We believe this to be part of a much larger prank, which is currently sweeping across the U.S.A. and parts of the U.K. It is very alarming [the man] was carrying a knife—however, we do not think he intended to harm the children and as far as we are aware, this is part of the prank,” local police Sgt. Mel Sutherland told the newspaper. “The children arrived at school understandably upset and distressed by this incident and we are currently trying to locate this man.”

Victoria Police in Australia also suggested it was handling similar situations, writing on Facebook that the “clown purge appears to be a copycat of incidents being seen in the US.” “Any intimidating or threatening, as well as anti-social behaviors will not be tolerated and will be investigated,” the police department added.

Clown hysteria has dominated headlines in the U.S. since late August, when reports surfaced in South Carolina of creepy clowns lurking in the woods and targeting children. 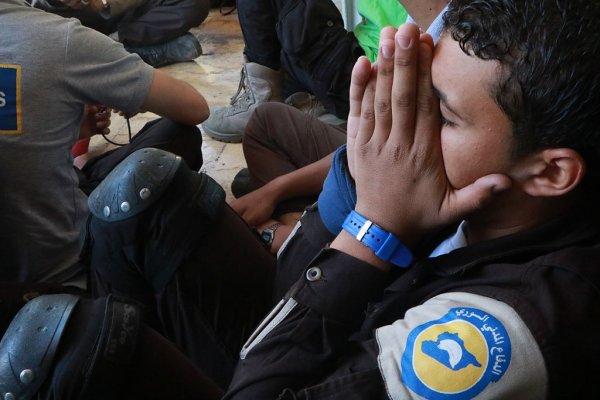 Syria's White Helmets Didn't Get the Nobel. But Their Rescue Work Continues
Next Up: Editor's Pick