Tired of this unending winter and ever-elusive spring? Well, here a new way to wile away those winter hours: Squirrel juggling.

A recent article in The Atlantic Cities explained that certain squirrels hibernate so deeply that you could take a page out of Alice in Wonderland and play croquet with the little knocked out fur balls. It’s a fact proven by science. Specifically, a scientist named Hilary Srere. “I did juggle three of them for my niece and nephew when they were younger, because they are just little fluffy balls!” Srere said. “They don’t wake up, they just don’t.”

To be clear, we do not recommend, encourage or condone juggling hibernating squirrels, it’s just interesting to note, scientifically speaking, that one could (if one was a budding squirrel-hating sociopath).

If one was going to juggle a squirrel (again: don’t), there are a few things to note: First, the grey squirrels that you see digging up nuts in winter do not hibernate. So if you see one that is unconscious, it’s either been KO’d by a mini Manny Pacquiao or it’s just asleep. Sleeping squirrels wake up and will bite. Hibernating squirrels are ground squirrels that live in the Central and Western United States who can go into a coma-like state for up to six months. Second, if you’re considering taking up squirrel juggling as a party trick, be aware that a surprising number of squirrels have the bubonic plague.

Not much of a party trick now is it? 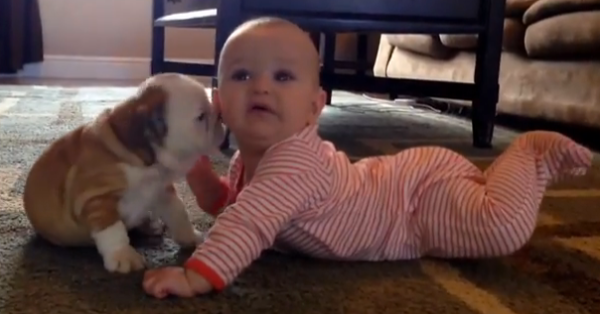 Puppy Love: Watch a Bulldog Puppy Kiss a Baby
Next Up: Editor's Pick