How to Convince People They Really, Really Need to Evacuate for Hurricane Matthew

People have a natural tendency to want to live. But for whatever reason, they also frequently ignore advice about what’s good for them. That’s a challenge for officials who are urging people to protect themselves as category 4 Hurricane Matthew gains momentum.

Officials told millions of Americans to evacuate their homes on Thursday to avoid the wrath of Hurricane Matthew, which is predicted to pummel parts of Florida and other south east regions of the U.S. The hurricane has killed over 100 people in the Caribbean. “This storm will kill you,” Florida Gov. Rick Scott said at a news conference. “Time is running out.”

During an imminent natural disaster, many evacuation experts say fear is the best strategy to get people to act—and Florida is implementing it. “There are no excuses,” Scott said. “You need to leave. Evacuate, evacuate, evacuate. … Are you willing to take a gamble? That’s what you’re doing.”

There’s been plenty of debate over the years about whether fear works in public health and safety matters—for example, putting graphic images on cigarette labels to deter people from lighting up. Amy Fairchild, the incoming Associate Dean of Academic Affairs at the Texas A&M School of Public Health, fear works when it’s used the right way. “Since the 1990s there has been emerging literature showing that fear can be effective,” she said. “As long people have something they can do in response to that fear, and this case they can evacuate, it can work.”

For fear tactics to be successful, Fairchild said people need to “feel it in your gut” that there’s a true risk. “The danger is that if you resort to fear too many times people think, ‘there they go again,'” she said. “In emergency situations, you have to be really cautious. Be careful not to cross over the line to fear mongering.”

Hurricane Matthew is clearly a dangerous storm, Fairchild said, and using fear to get people to safety is probably appropriate. “In the face of uncertainty, you are better off taking measures that save more lives,” she said.

So far more than two million people living in areas of Florida, South Carolina and Georgia have been told to evacuate. “If there is an evacuation order in your community, you need to take it seriously,” President Obama said after a briefing on Hurricane Matthew. “You can always rebuild, you can always repair property; you cannot restore a life if it is lost.” 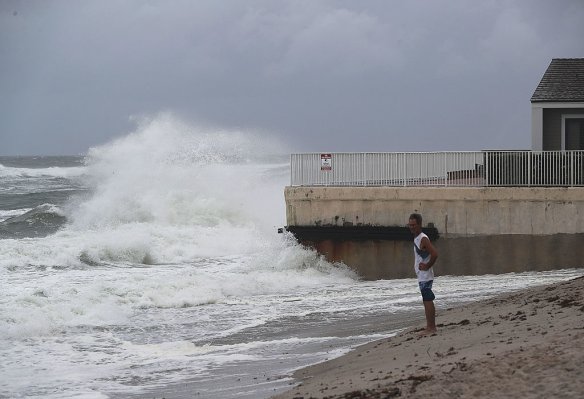 This Weather Phenomenon Makes Hurricane Matthew Much More Threatening
Next Up: Editor's Pick