This Is What It's Like to Overdose on Hot Sauce

There’s an episode of “The Simpsons” famous among chiliheads in which Homer eats several of the “Merciless Peppers of Quetzlzacatenango, grown,” Chief Wiggum tells us, “deep in the jungle primeval by the inmates of a Guatemalan insane asylum.” Homer goes on an immersive hallucinogenic trip, complete with Johnny Cash as the voice of a talking coyote, which launches him on a journey to find his soul mate.

I’ve had as many hot sauce overdoses as any garden-variety chilihead, but I’ve never had a full-on psychedelic experience induced by chilies. One hot-sauce overdose in particular, however, did reveal to me the power of the flood of brain chemicals triggered by a heavy dose of hot sauce.

At the NYC Hot Sauce Expo in 2015, I took a chili challenge at the Voodoo Chile booth. In order to hop on what Voodoo Chile’s president and “Chief Sauceologist” Thomas Toth calls the “Endorphin Express,” I had to tangle with his scorpion pepper tincture, which weighs in at a daunting 3,278,000 SHU. For comparison, that’s roughly 18 times hotter than Dave’s Insanity Sauce, 650 times hotter than Tabasco, 1,300 times hotter than Huy Fong Foods’ Sriracha, and about twice as hot as the hottest chili pepper known to humankind, a cultivar of Capsicum chinense known to the world as the Carolina reaper. It was not a pleasant experience—at first.

I was made to eat one small dollop and stand with Toth at his booth without spitting or ingesting anything else—so, no milk, no beer, not even water. After two minutes, I had a 30-second window in which to bail or to go all in and eat another dollop for another two-minute stretch.

Under those conditions there is no effective cooling method available except for the devil’s bargain of forming your mouth into the whistling shape and inhaling sharply; a devil’s bargain because the breath somehow seems to burn even worse on its way out. One has only to stand and be with the pain. The key is to remind yourself that the whole thing is a trick of the mind. Toth’s scorpion pepper tincture burned worse than anything I tasted before or since, like 3.278 million tiny ember-hot knives dancing around my mouth, but relief of a metaphysical sort came by simply reminding myself that the hot knives were an illusion. There was no real damage being done. Practitioners of mindfulness-based stress reduction use meditation techniques to achieve a similar effect to help people suffering from chronic pain. The idea is to help them identify and isolate their pain and ultimately decouple it from other sources of suffering that physical pain can evoke, like fear and hopelessness.

There’s a Zen-like pleasure in this part of the experience, in which the overwhelming pain takes hold of your complete attention and reins in your focus to the immediate experience of now, allowing a sense of presence and a kind of meditative peace to arise within.

Once the allotted time had passed, I chugged a beer and speed-walked toward the bathroom, doubling over for a moment as the stuff hit my stomach and my gut flinched into a smoldering knot. When I reached the sink, I opened a faucet of cold water and put my mouth under it for two minutes or so. Then I made a beeline for the ice cream stand, cut to the front of the hot sauce ice cream line making hand signals to indicate my predicament to a sympathetic crowd—this was a hot sauce festival after all—and sucked down an entire pint of Bonfatto’s Spice Cream’s Whodathunkit?! Sweet Peachy Heat Wave. For hours after the pain subsided, I felt simply marvelous, like a creature made of clouds and light—clear, pleasant, calm, and energetic, but not anxious. This was my brain under the influence. I was high as a kite on hot sauce. 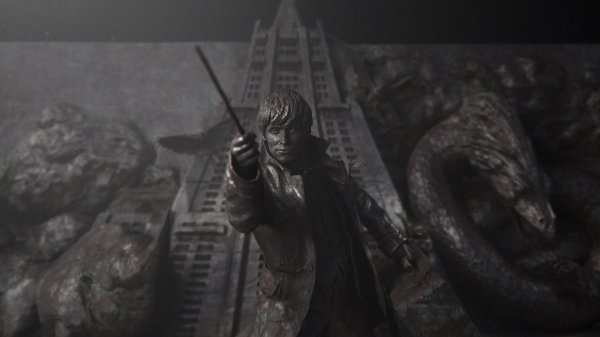 J.K. Rowling Just Revealed Another Fascinating Tidbit About American Magic in a New Story
Next Up: Editor's Pick