A Brief History of Divorce in America: From Legal Rarity to Dark Comedy

Sarah Jessica Parker’s return to television on HBO’s Divorce follows the story of a woman as she uproots her life with the hope that liberation from a 17-year marriage will solve all her problems. The series not only sheds light on divorce, it makes light of it, too.

But the history has not been kind to people—especially women—who sought divorce. And it wasn’t even until the late ’60s that Americans were allowed no-fault divorces, meaning either party could walk away sans spousal wrongdoing.

The modern concept of a divorce can vary by culture and religion, but early forms of the idea were almost always a male prerogative.

“People think divorce is a modern invention but divorce was very common in the past,” says Stephanie Coontz, a teacher of history and family studies at Evergreen State College and author of Marriage, a History.

As evidence, Coontz points to one of the most famous divorcees in history, Henry VIII, who was initially married off for a dynastic alliance to Catherine of Aragon. He asked the Pope for permission to end his marriage when Catherine couldn’t bear children and, despite being denied, went on to do it anyway, using loopholes in the church to marry Anne Boleyn. This break with the Church helped bring Protestantism to England.

In the U.S., the escalation of divorce came alongside the American revolution, says Steven Mintz, who teaches history at the University of Texas at Austin.

It became increasingly common for Americans to use legal ambiguities to dissolve their marriages, using what was called omnibus clauses in the 1800s to persuade courts to liberate them. At the time, Mintz says, divorces were legally allowed with proof of physical cruelty and adultery, but the omnibus clauses legalized divorce “in all cases where the court in its discretion thinks it just and reasonable.”

The idea of divorce continued to spread throughout the country, and certain states used the vagueness of the omnibus clause to entice new residents by promising them easy divorces.

Throughout the second half of the 19th century, divorce rates continued to rise. As marriage and divorces laws changed, 1867 was the first year national marriage and divorce data became available. And for the next few decades, Americans continued to try working around loopholes in what she calls a “really weird” legal system. Fault-based divorce laws required specific grounds for divorce, and rule known as the “clean hands doctrine” necessitated that the complaining party couldn’t have done anything contributory to the problem.

“There was a case in Oregon in the 1930s where the father had a violent temper but the wife had thrown things at him, too, so since neither party came to court with clean hands, even though they were miserable, they couldn’t divorce,” Coontz says.

By the 1950s, however, there was an entire legal industry set up to make a mockery of these laws, Coontz says. For example, in Illinois, couples could get divorced if a witness could see the hand print of a slap on someone’s cheeks, which led to many a witness claiming as much with or without an actual sighting. Eventually, jurists figured it was time to stop making divorce such an adversarial process and in 1969, Ronald Reagan, then governor of California and himself a divorcee, signed the state’s Family Law Act, introducing the concept of irreconcilable differences.

Though divorce became commonplace, it still carried a heavy stigma.

Calling all history lovers: Get a book from our History collection with your paid subscription to TIME. Click here for more details.

Both experts confirm, however, that though divorce rates are often reported as spiking, those statistics can be misleading. In fact, in 2014 it was reported that couples married in the 2000s are divorcing at lower rates than those of the 1970s and 1980s. Data provided to the New York Times from Justin Wolfers, a professor of economics and public policy at the University of Michigan, proved that if current divorce trends stayed on track, it could lead to nearly two-thirds of marriages never ending in divorce.

When it comes to HBO’s latest potential hit, Coontz says the show may be a side effect of people realizing that divorce doesn’t need to be extreme.

“I think many people are trying to divest divorce of its element of it being a tragedy, a betrayal or a reason to hate each other forever,” she says. “I think [the show’s creators] are responding to what’s been a healthy development.” 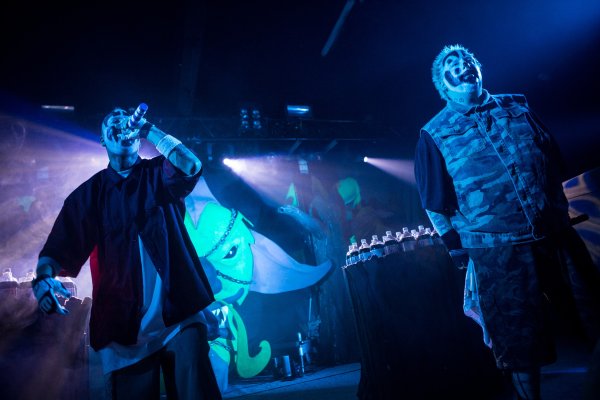 Insane Clown Posse: Who Are the Real 'Killer Clowns' Terrorizing America?
Next Up: Editor's Pick