Kylie Minogue, left, and Joshua Sasse at an afterparty for Absolutely Fabulous: The Movie in London on June 29, 2016
David M. Benett—WireImage
By Tekendra Parmar

Australian singer Kylie Minogue and her fiancé, British actor Joshua Sasse, said they would love to get married in Australia but won’t until same-sex marriage is legalized there.

The couple, who got engaged in February, have said they would like to tie the knot in Minogue’s hometown of Melbourne, reports the Guardian.

“There are chances of a Melbourne wedding … [but] we will not get married until this law has passed in Australia,” Sasse told Australian television channel Network Seven on Thursday.

The pair have been outspoken in their support of same-sex marriage in Australia; over the weekend Sasse launched the “Say I Do, Down Under” campaign to support various organizations fighting for marriage quality.

“I was shocked to find out earlier this year that same-sex marriage in Australia is still illegal,” he said on the campaign’s website.

Australian actress Margot Robbie was seen wearing the campaign’s T-shirt, which features a map of Australia in rainbow colors, on the season premiere of Saturday Night Live on Saturday.

The country’s Prime Minister Malcolm Turnbull has promised a national referendum on same-sex marriage, which is slated to be held in February.

“There are many hurdles in order to achieve marriage equality, but we are now the closest we’ve ever been to that change,” Sasse said. 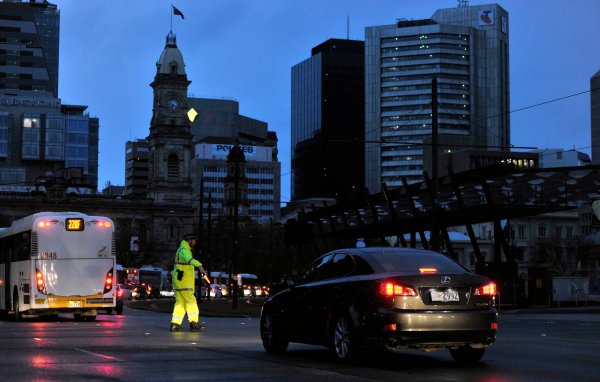 Thousands Without Power in Australia After State-Wide Blackout
Next Up: Editor's Pick