Thus far, I am in agreement.

But when they sort out which candidate is which, we part company. For some analysts, Trump is the “change” candidate, Clinton the “status quo.” They see Trump as an outside disrupter and Clinton as an insider with many years of experience but little to show for it.

But that’s backwards and upside down. If we correctly interpret “change” and “status quo,” Donald Trump stands for the former, Hillary Clinton the latter.

Any changes Trump might offer are trivial at best. Trump looks an awful lot like every other president (except maybe the current one); while his family name was originally German, it has been changed to look Anglo-Saxon, like the names of the great majority of former presidents; his hair is weirder than most, but it still resembles that of the others, more or less; he generally dresses in suits and ties, like most presidents of the last century or so. And his interests dovetail with those of too many traditional presidents: military aggression, swagger and bluster.

In short, Trump looks and acts a lot like the familiar alpha male. These are the guys who have been in charge for many millennia. Is this “change”?

James Fallows made the point in a recent article for the Atlantic: Trump is (as Jane Goodall has noted) reminiscent of a male chimp in his gestures and communicative patterns. This pattern has been intrinsic to our species—gorilla, chimp and Homo sap—since we were all apes together. The higher in chimp society a male gets, the more he makes use of these power tools. So if chimps had elections and presidents, we would expect to see candidates behaving very much like Trump. The only difference between him and most former presidential candidates is that his apery is more apparent. But in no way do his words and actions represent any kind of meaningful change from the norm created millions of years ago. Rather, they stand for the ancient—very ancient—status quo. That’s why certain people find Trump comforting.

On the other hand, consider a recent article in the New York Times Science section: Bonobos, endangered primates closely related to both us and chimpanzees, have a matriarchal society: the females rule the tribe. They get things done via expressions of intimacy, rather than (like other primates we could mention) aggression and threats. The females get to make the rules and run the show because they cooperate with one another and form alliances, and the males don’t. In other words, bonobo society works by the Madeleine Albright doctrine: there is a special place in hell for females who don’t help other females. And they appear to have more fun (lots of sex, not much violence) than the primates whose societies work by aggression rather than cooperation, “me” rather than “us”: I alone can fix it.

It seems to me to be uncontestable that in this election, Clinton is the agent of true change. And true change is scary and threatening, and when we encounter it, we find it unlikable, unfriendly, unknowable. As much as we like to represent ourselves as forward-looking and unafraid of the future, we are much more comfortable in the present and, even more so, in the past—especially a golden-age version of the past where men were men, women were women, white males were entitled to nearly everything, and everyone was happy—a past that never existed.

Clinton appears to us as the antithesis of that antediluvian time, the beginning of something we cannot and do not want to get our heads around. We want it to go away. But that is cowardly, and besides, it will not go away. The future will come, as it always has. Maybe, if Trump prevails, he can slow it down, but it will come roaring back in another form sooner or later, probably sooner.

We don’t know what will happen if Clinton wins. A lot depends on the Congressional elections, and much more besides, over which she will have little or no control. But there is a chance, however slim, that her inaugural could initiate real change in how we see ourselves and relate to one another, and how we change government from gridlock to functionality. A Trump victory promises more of the same and worse: men behaving badly. 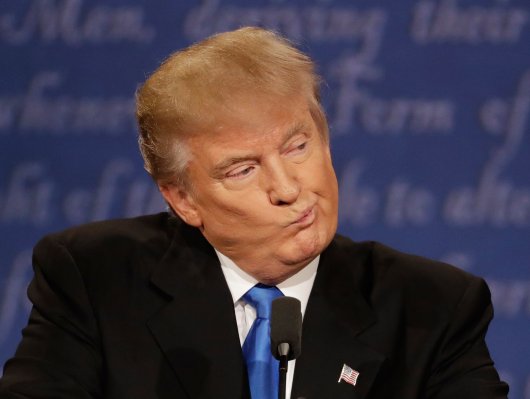 Donald Trump Is an Economic Birther Too—And That's Even Scarier
Next Up: Editor's Pick