To the surprise of just about everybody, Britain’s Prime Minister Theresa May cracked a joke today.

Addressing her Conservative Party’s annual four-day conference in the U.K.’s second city of Birmingham, May mocked her Foreign Secretary, the infamously loquacious Boris Johnson. “When we came to Birmingham this week, some big questions were hanging in the air. Do we have a plan for Brexit? We do. Are we ready for the effort it will take to see it through? We are. Can Boris Johnson stay on message for four days?”

Not even three months into her premiership, May is in her honeymoon period and the gushing audience burst into laughter. “Just about,” she then smiled, prompting effusive applause. Sir Malcolm Rifkind, a former Conservative Foreign Secretary, tells TIME that May “is funny in private”, but this is not her public style.

Certainly, there were few laughs in the rest of her speech. Instead, Britain’s new Prime Minister seized an opportunity to frame both her style and her political philosophy. She staked a claim for the political center ground, which represents fertile territory as her left-leaning opposition parties are waging civil war (Labour) or have virtually no Members of Parliament (the Liberal Democrats). If successful, a shift to the middle could keep the Conservatives in power for a generation. They are already nine points ahead of Labour according to the latest YouGov opinion poll.

In the wake of the U.K.’s anti-establishment vote to leave the European Union, May displayed empathy for working and regional middle classes fed up with metropolitan, particularly London-based, political elites and their sense of intellectual superiority. “Just listen to the way a lot of politicians and commentators talk about the public,” she said.”They find your patriotism distasteful, your concerns about immigration parochial, your views about crime illiberal, your attachment to your job security inconvenient.” It was a speech, said Conservative MP and former cabinet minister Andrew Mitchell, that would “strike an echo across middle Britain, those people who feel alienated from politics and politicians”.

Certainly it represented a striking difference from some of her predecessors. As Britain’s second woman prime minister, May is often, lazily compared with Margaret Thatcher. But the woman who led Britain from 1979 to 1990 would never have made the speech that May made on Wednesday. She attempted to position the Conservatives as a party that will create a meritocratic society and improve the finances of the poor. She said she would “encourage” free markets, but that her Government would also step into “repair them when they’re not working as they should”.

The Iron Lady would certainly never have questioned the wisdom of the markets. Rifkind argues the 60-year-old is only similar to Thatcher in that she possesses a determination and resolve that makes her “bloody difficult” to work with – a reference to a comment made by veteran Tory Ken Clarke this summer.

Neither is May much like her immediate predecessor David Cameron and his circle. Rifkind says that May, a vicar’s daughter, has none of the “flash” of the largely privately school educated group that ran government under the witty and charismatic Cameron. “She’s not a great extrovert,” he says. “She has identified a number of causes that are not traditionally Conservative, that in the Thatcher days would have been seen as ‘wet’ and wimpish. Her government does not hesitate to intervene on injustices being caused, for example, by the way companies deal with employees.”

For example, May’s government announced this week it would reverse Cameron’s deeply unpopular policy of reassessing people with severe ill health conditions, such as Parkinson’s disease, over whether they qualified for certain welfare payments. Work and pension minister Damian Green called it a “hard-hearted” policy.

At the same time she is attempting to protect British jobs by forcing companies to reveal how many foreign workers they employ. This is a response to anger at high net immigration numbers – a record 333,000 in 2015 – particularly from the E.U., which convinced many people to vote for Brexit.

“Everything May does is about those struggling to make enough [money] at the end of the month,” said Nadhim Zahawi, Conservative Member of Parliament for William Shakespeare’s birthplace, Stratford-on-Avon. “In domestic policy, there’s Damian Green’s announcement that we would be ending the [welfare] reassessment of those who are chronically ill. There’s focus on the rights of employees, even publicly publishing the percentage of Brits and foreigners in employment. What you’re seeing is a thread that she is maintaining through everything.”

It’s one way to combat the wave of populism in modern politics, he says. “She’s really studied carefully the Brexit outcome and fractures in Europe, such as the Five Star Movement in Italy and even the U.S., where [Donald] Trump is completely off-the-scale crazy, ‘elect me because I’m a billionaire’.”

If May understands the world is changing, with the rise of populist movements and candidates on the left and right, she knows she must be tough on Brexit negotiations with long-established European elites. May kicked off the conference by confirming she would trigger Article 50 of the EU’s Lisbon Treaty by April, kickstarting two years of hugely complicated Brexit negotiations. She also announced a Great Repeal Bill that will allow the U.K. to keep E.U. laws it likes and ditch those it doesn’t.

Although the pound took a fresh hit against the dollar on the news, the party has rallied around May’s plans. John Glen, an M.P. who is parliamentary aide to finance minister Philip Hammond, says the Prime Minister has silenced her critics. “She’s given us a [Brexit] roadmap and it’s one that is difficult to argue with,” he said. “There are very few dissenting voices in the party, despite what most people expected.”

Mark Spencer, an assistant government whip, adds: “Theresa has set her stall out very robustly. She’s clearly leading on Brexit and is giving us deadlines without too much detail, because the second she sets that out that’s the bar from which you negotiate at.”

But there is one potential concern: May could be a micromanager. For example, she reviewed plans for an £18bn nuclear power plant, Hinkley Point C, that is supposed to herald a new generation of civil reactors. Concerned by Chinese investment and the cost of the plant’s electricity to bill payers, this review delayed approval of the project by two months. One minister tells TIME: “There’s more control from Downing Street to the point where Downing Street is controlling everything. Hinkley Point is a good example – the environment department should be making decisions about it, whereas she clearly took hold if it.

“For Brexit, this control gives us reassurance, but as we move forward and we move out of the E.U., you would hope to see departments given a bit more authority. One person can’t control the whole of government, and she’s got to learn to delegate.”

Given her dominance of Britain’s political scene right now, May might find letting go far harder than getting a few guffaws from the party faithful. 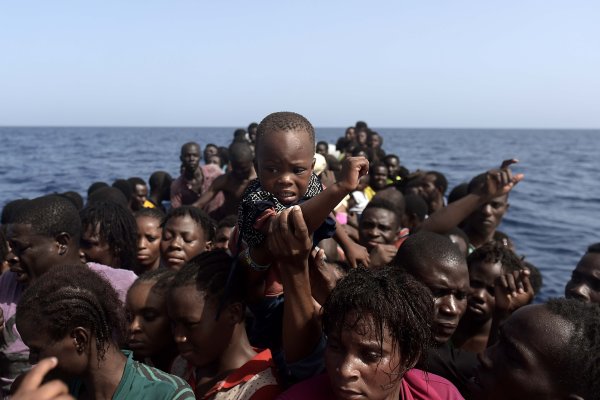 Over 4,500 Migrants Rescued from Sea in a Day
Next Up: Editor's Pick