How to Fulfill the Promise of the Paris Climate Deal

Less than a year ago, world leaders inked the historic Paris climate deal. In record time and against the odds, the deal will become the law of the planet before Election Day in the U.S. This is an enormous accomplishment. But it is also just the beginning.

By the end of this week, the United States, China, India, the European Union, Canada and more than 50 other countries will have legally joined the agreement, crossing the thresholds that brings the pact into full legal force. Under its terms, the agreement comes into force 30 days after 55 nations, representing 55% of global greenhouse emissions, legally join. These dual thresholds were chosen to ensure that the new deal becomes binding only when both the biggest polluting nations, and a large share of all countries, large and small, are on board.

Even six months ago, it seemed impossible to imagine that the world could rally to bring the Paris Agreement into force so quickly. International law typically moves at a glacial pace. But just as carbon pollution is changing even those reliable rules of nature, politicians need to change what’s considered politically possible.

Make no mistake—it has taken more than 30 years to get to this point. World leaders, including President George H.W. Bush, signed the first international climate change treaty in 1992. In those days, protecting food, water and natural treasures was not taking sides in a political debate. A backslide in political will and unfounded attacks on science itself stalled further progress, costing precious time. That has finally started to change.

The tipping point was reached when governments decided to work together, crossing old lines of division and competition. President Obama and President Xi Jinping from China—two countries at historic odds on climate negotiations—changed the tough politics they each faced at home and reassured other nations that the world’s largest polluters were finally going to move.

Now all nations need to move quickly enough to meet, and beat, the national pledges made in Paris. An enormous gap remains between the goals set in Paris—decarbonizing the global economy and limiting planetary warming to well below 2 degrees with best efforts to not exceed 1.5 degrees Celsius—and the specific targets nations made to cut carbon pollution.

A super-charged Hurricane Matthew bearing down on the Caribbean and Florida provides a stark reminder that now is not the time to be complacent. Dangerous planetary tipping points are on the horizon that threaten us all, but the poorest and most vulnerable first and most.

Once-in-every-1,000 year events are becoming commonplace around the U.S.—the latest example in southern Louisiana as they were hit by more than two feet of rain during just a few days this summer. The severe drought brought on by the 2015-2016 Super El Niño, likely made more extreme by climate change, now affects more than 60 million people around the globe. Some 24 million people in East Africa alone face severe food insecurity.

A destabilized Arctic and melting Greenland threaten hundreds of coastal cities with extinction. The planet has already lost half of all coral reefs, threatening food supplies for communities around the globe. This year alone, 93% of Australia’s Great Barrier Reef suffered bleaching from a warming ocean. Our posterity and future prosperity depend on delivering the promise of Paris.

We get to write the next chapter. There is a lot to like about our chances. People are waking up to their own power, and we continue to see new leadership emerge.

Recent national political progress was stoked by business leaders standing alongside governors and mayors calling for change and showing us the future through their present actions. Four hundred thousand people took to the streets demanding action as world leaders gathered in New York to scope out the Paris deal.

As we look ahead to this new chapter, the choice is between cooperation or division. The Paris Agreement happened because leaders worked together, sometimes at great political risk. And more is needed. The reality is that no single country can solve this problem alone. Our success here in the U.S. relies on success in places like India and Mexico. We need to invest in those places too if we hope to meet our goal.

And it’s our job—all of us—to make it easier for our leaders to do the hard work of meeting the promise of Paris. Whether its investors ditching the carbon bubble and valuing safe, sound investments for the future, or businesses decarbonizing our global energy supply, or individuals making smart choices in the energy they buy and the food they eat.

It took us a while. Many didn’t think we could get here. But with the wind finally at our backs, now is the time to redouble our efforts to reach our shared goal. 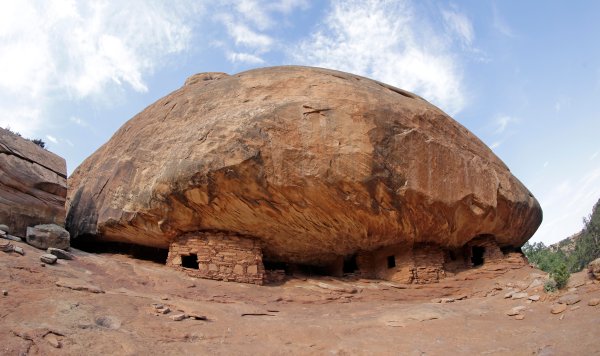 These Are America's 11 Most Endangered Historic Places
Next Up: Editor's Pick